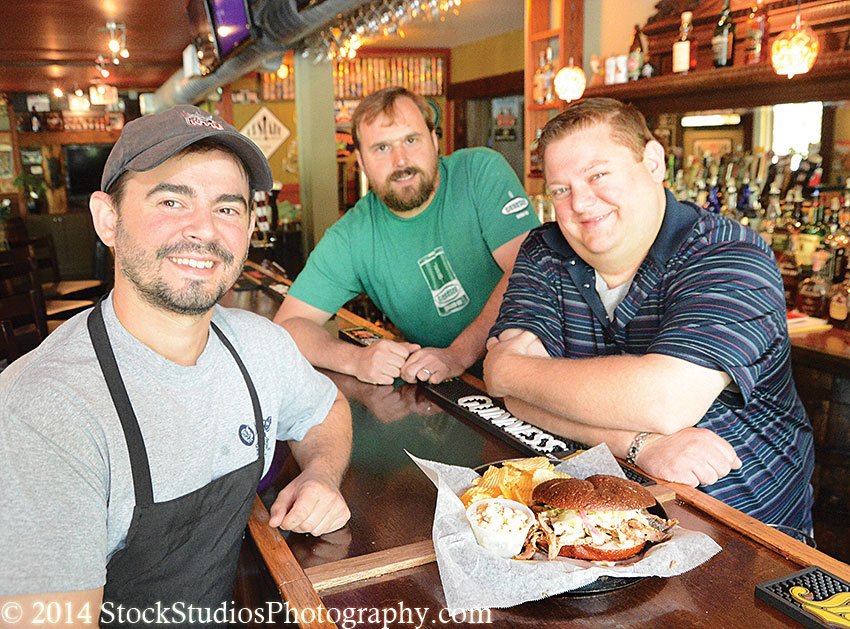 In a city known for its upscale gourmet
restaurants, the Barrel House, newly opened
at 68 Beekman St. in the Saratoga Springs
Arts District, aims for a different vibe: A
neighborhood feel, welcoming the “typical
working man” to come in and relax, according
to co-owner Tyler Kelly.

The Barrel House opened July 11, following
three months of decorating and furnishing
the former Groggery. The previous tenants
removed just about everything except the
bar and the hand-carved, circa 1860, statues
behind the bar, Kelly said.

The name Barrel House, according to Kelly,
is a made-up name but, he noted, it is a term
used for southern bars near plantations that
cater to the plantation’s workers.

Patrons order their food at the bar and
have it brought out to their table, or get it
packed to take out. The restaurant can seat
about 100, with additional space at picnic
tables and Adirondack chairs on a partially
covered patio in the rear.

Smoked meats are predominant on the
menu. Barrel House smokes its own pork, turkey and chicken and gets the rest from
Oscar’s Smokehouse in Warrensburg, the
owners said.

Side dishes include macaroni salad, potato
salad, and other “homemade, picnic-style”
side dishes, Kelly said. So far, the best sellers
on the menu are the “three-meat treat,”
a hamburger topped with pulled pork and
bacon, and the “pork barrel,” a pulled pork
sandwich, Kelly noted.

There is also some lighter fare, including
salads. Kelly said they try to use local produce
in their kitchen, buying from places like
Schoharie Valley Farms and Antonucci’s in
Gloversville.

If someone is not in the mood for a full
meal, Barrel House offers snacks such as
chips and dips or cheese and crackers. The
bar offers 20 beers on draft, including several
local and regional beers, as well as wines and
hard liquor.

So far, the staff consists of Kelly, his
co-owner, Charles Usas, and cook Dan Passamonte,
but in late July they were about to
add more staff as the business builds.
“Quite a few people are coming through to
apply for jobs,” Kelly said.

Barrel House is open 11 a.m. to 11 p.m.,
Monday through Saturday. Their telephone
number is 871-1502. Its website is www.barrelhousesaratoga.com and it can be found
on Facebook.