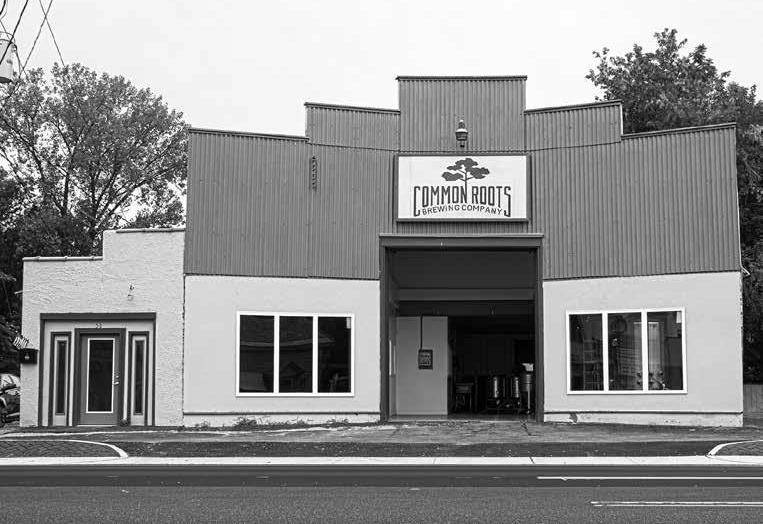 The opening comes after months of trial
brews with a pilot system one-twentieth
the size, extensive renovations to convert
a former warehouse into a brewery and
tasting room, and all the other details
involved in getting a new business started.

Weber, the head brewer, and his father
and business partner, Bert Weber, are just
waiting for licenses to arrive to schedule a
soft opening and, soon after that, a grand
opening.

Common Roots plans to include some
barrel-aged beers in its mix of traditional
and specialty brews. The beers will be
conditioned in used barrels purchased
from vineyards and distilleries that were
no longer able to use them for their original
purpose.

Bourbon barrels, for example, will come
from two nearby distilleries. Those barrels
can only be used once to age bourbon, said
Weber. They can be used again to produce a
bourbon-tinged beer; then again for beers
with less of a hint of bourbon or for “wild
beer,” made using wild yeasts and bacteria.
In the end, some of the barrels may be
dismantled to become handles on the beer
taps, he said.

New York state’s recently-adopted
Craft Beer Act, which will allow Common
Roots to serve beer by the glass in the
tasting room, is “very exciting and a game
changer for how we operate that space,”
Weber said.

Instead of a space to sample by the sip
and purchase to take out, “the tasting room
will be a welcoming space for beer enthusiasts
and community members to hang
out and enjoy a variety of Common Roots
beers, fill growlers, and purchase bottled
beer and brewery merchandise,” he said.

Promotional merchandise, including
beer glasses and Common Roots hoodies,
will be on sale, but there will be no food
available.

The exact mix of beers remains a
closely-held secret and will not be made
public until the brewery opens, Weber
said, probably in late August or early
September.

“Our beer portfolio is clearly something
we are most proud of. After all, brewing
great beer is the reason we are opening
this brewery in the first place. It is also
the one card we are playing close to the
chest until the soft opening,” he said.

Common Roots joins a growing number
of craft breweries in the Saratoga and
Glens Falls area. It will becoming one of
a dozen or so on a new Adirondack Craft
Beverage Tour devised by the Adirondack
Regional Chamber of Commerce that
includes breweries, pubs, distilleries,
and wineries in Saratoga, Warren and
Washington counties.

The hope is that the introduction of
“brew tourism” will encourage visits to the area at all times of the year, beyond
the traditional summer season. Organized
in early July, the Chamber has been distributing
maps for self-guided tours and
provides information on its website, www.adirondackchamber.org.

“Upstate New York is already on the trajectory
to be a craft beer destination,” Weber
said. “The Saratoga/Glens Falls region
is rich in cultural amenities and the craft
beer community is increasingly becoming a
part of that mix. Common Roots is excited
to join the currently established breweries
to help make that possible.”

The Webers, father and son, brewed
their first batches of beer at home in 2005
and continued as home brewers.

As a graduate student in New Hampshire,
Christian Weber was an apprentice
brewer at White Birch Brewing in Hooksett,
N.H. Although persuaded by his New
Hampshire experience that the craft beer
industry was his destiny, he completed
his degree and, until last January, was
executive director of the Lake Placid Land
Conservancy. His father is a retired BOCES
horticulture and landscape design teacher
and active with Cornell Cooperative Extension’s
community gardens program.

Raw materials for the beers–grains,
hops and yeast–will come from a variety
of sources. They will use locally sourced
products when they are available. For now,
however, the grains come form all over and
the hops, mostly from Washington state.
Much of the yeast will come from an inhouse
yeast laboratory.

“Yeast is amazing,” Weber said. As beer
brews, the amount of yeast increases
rather than getting used up. Different
strains produce different tasting beers and
they will be sorted and propagated in the
Common Roots laboratory.

Common Roots is located at 58 Saratoga
Ave. (Route 9) in South Glens Falls, in the
former warehouse of an overhead door company.
The telephone number is 321-4735 and
its website is www.commonrootsbrewing.com. Plans are for the brewery and tasting
room to be open seven days a week but hours
have not yet been determined.
Photo By Tyler LaPan