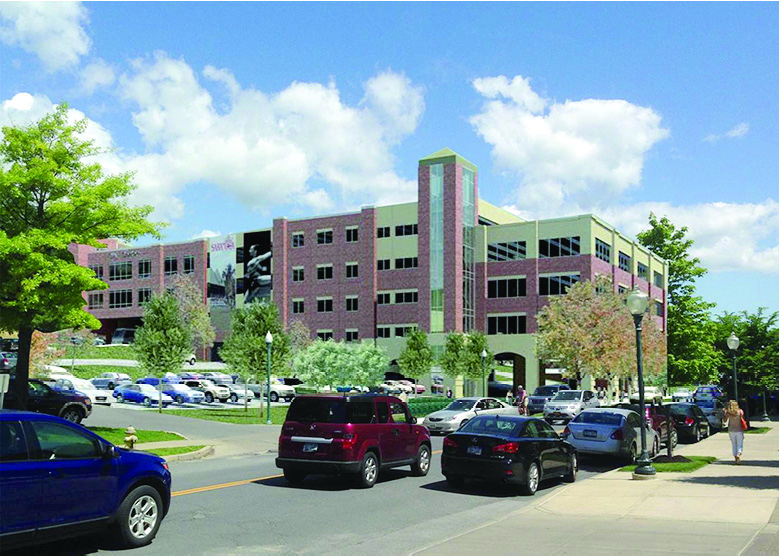 Saratoga City Center is negotiating a lease on a portion of the present municipal parking lot so it can build a parking structure that will look like this, adding some 500 new spaces

Some 500 spaces of new parking will soon
be added to downtown Saratoga Springs with
construction of a multi-level parking structure
east of the Saratoga City Center.

The City Center Authority is negotiating with
the city for a 20-year lease on a portion of the
present municipal parking lot and also negotiating
details of the building’s “developmental
criteria,” according to Mark Baker, president
of the authority. “I am working closely with the city and with my board.”
The financial arrangements with the city
will mirror those for the convention itself,
which was built on land leased from the city,
Baker said.

“It’s taking a little longer than I anticipated,”
he said, but he still expects construction to
begin by the end of the year and to take about
eight months to complete.

Envision Architects is designing the structure.
Baker said that it will have a brick facade
and “we will try to have it fit into the
streetscape.”

He expects the parking structure to look
more like an office building than a parking
garage. The parking structure will be separate
from the City Center building, but connected to
it by an enclosed walkway. The plan is to have
the parking facility monitored around the clock
by closed circuit television with additional
security provided by parking attendants.

Baker estimates the cost of the addition at
$9-10 million. Parking will probably be free for
the first hour or two and, after that, in the range
of $10 or $11 a day or overnight.
“Just enough to cover the debt load,” Baker
said. He said that he hopes that, in time, the
parking structure will be able to pay for itself.
Monthly leases are a possibility, but Baker said
that has not yet been decided.

Recent renovations and additions to the City
Center have increased the demand for parking
in downtown Saratoga Springs. A 2011 project
added two additional meeting facilities to the
center.