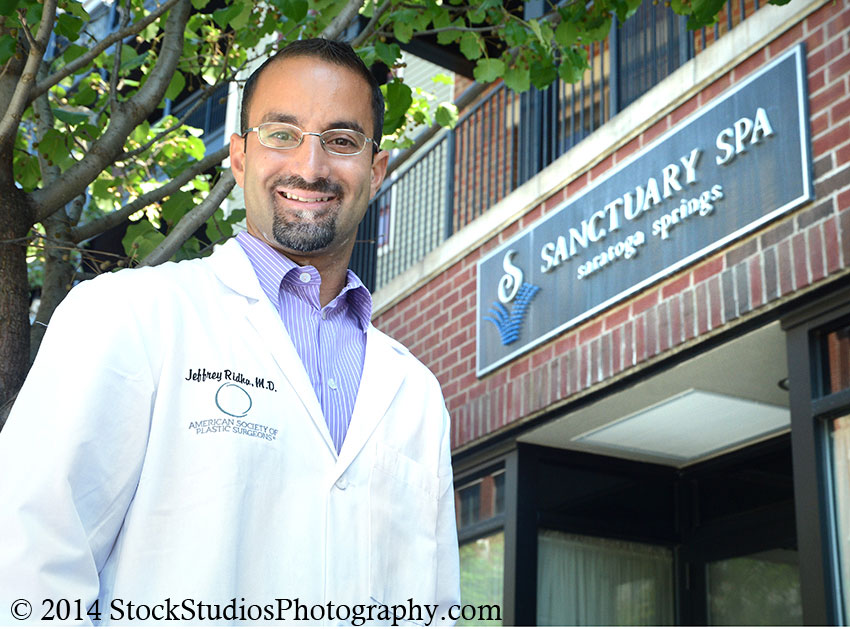 Saratoga Springs plastic surgeon Dr.
Jeffrey Ridha calls his purchase of the
Sanctuary Spa a “win-win” for both his
patients and the spa’s customers.

Dr. Ridha, who practices at 83 Railroad
Place, closed on the purchase of the
Sanctuary Spa–which is just across the
street at 72 Railroad Place–in late June.
The former owner, registered nurse Debra
Docyk, has retired.

“I had interacted with the former owner
as a client at the spa, and I always thought
it was a very nice place with a great reputation,”
Ridha said. “When I found out the
spa was for sale I thought it would be an
excellent addition to our practice.”

The medical spa has operated for eight
years, and is one of the most popular in the
area. It specializes in laser skin rejuvenation,
therapeutic massages and facials.

Dr. Jeffery Ridha MD PC offers plastic
and reconstructive surgery, along with
injectable fillers such as Botox and Juvederm.
The doctor said the merger will
allow it to offer a more diverse range of
services, and attract a broader patient
base, as one of the largest combined
medical practices and spas in the region.

“I think that medical spa services go
hand-in-hand with plastic surgery and
cosmetic dermatology practices, but I
think offering the full range of spa services
is something that is not quite as
common,” he said. “But to me is a very
natural fit because everything to do with
wellness and feeling good, feeling relaxed,
feeling fresh, feeling rejuvenated,
is really what we want to provide for our
patients.”

He said the purchase will also allow
the Sanctuary Spa–which will keep its
name–to offer clinical-level treatments
to its clientele. He is evaluating the services
offered and may add some and drop
other, less popular, ones.
He is also looking at personnel.

“We are certainly going to make sure we
have the best staff that is available,” he
said. “I am going through the process now
of evaluating the current staff and determining
what their skill sets are. If [the
spa] is something I am going to have our
name on, it has to have the highest level
of quality, with therapists that have excellent
client care and customer service as
well as experience and knowledge.”
Ridha also will give the spa itself a facelift.
“We plan to really update things and
create a modern, clean, beautiful space,”
he said.

Former owner Docyk said she believes
Ridha will do well with the spa.
“With the aging of the baby boomers
and the exponential growth of Saratoga
County, the demand for our services has
been overwhelming,” she said.

According to a 2013 report by research
firm Marketdata, there are 2,100 medical
spas in the United States, with combined
revenue of $1.94 billion in 2012. This
averages out to $924,000 per facility.
The firm forecast market growth of 18
percent a year.

Ridha grew up in Ohio, where he attended
medical school. He completed
his surgical training in the New York City
area. He moved to the area in 2008, opening
an office in Glens Falls. He moved the
practice to Saratoga Springs about two
years ago. While cosmetic surgery, such
as breast augmentation and rhinoplasty,
is the largest part of this practice, he also
does reconstructive surgery for victims of
burns, cancer, and so on.

Sancturary Spa can be reached at 587-
5219. Its website is www.sanctuarysaratoga.com.