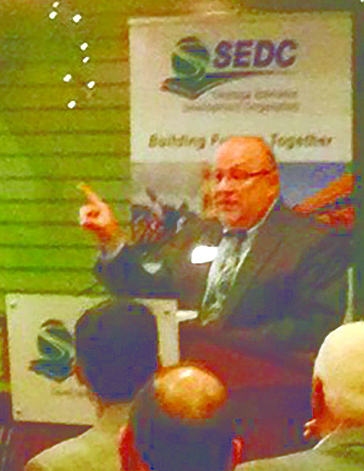 The efforts of the Saratoga Economic Development
Corp. is focused on job retention and
maintaining the businesses that already exist
in the county, its president told a group of local
business people in September.

At a luncheon at Longfellows Hotel and
Conference Center, SEDC President Dennis
Brobston unveiled the results of an Economic
and Fiscal Impact Analysis the agency commissioned
to substantiate their efforts in Saratoga
County.

He addressed the audience at the luncheon,
noting the impressive impact of the SEDC over
the last 26 years, but also said the agency has
to “balance the work we accomplish. Retention
and attraction projects seem to come in cycles.
You read about the attraction [of new businesses]
in the paper most of the time. We need
to be concerned about our existing companies,
that we retain them in Saratoga County.”

Camoin Associates of Saratoga Springs
produced the study which lays out SEDC’s
accomplishments since 1978. It uses as case
studies seven companies — Quad Graphics,
GlobalFoundries, Ball Corp., State Farm,
Ace Hardware, Target and Sepsa/Albatross
— which it says account for 11 percent of
the county’s work force in direct (5,546) and
indirect (4,143) jobs.

“The case studies in the report are tools we
will use to show our potential clients that we
can deliver what we say we do. But that is only
part of the reason” for the study, Brobston said.
SEDC commissioned it to “quantify the value
of our economic development work in Saratoga
County,” he said. SEDC has helped more than
200 companies but “didn’t really have a grasp
on their fiscal impact other than to say that
we help create over 17,000 jobs and over $10
billion of investment. We need to understand
what the impacts would be if we were to lose
these companies. What would be the loss of
revenue and to whom?”

He said the seven companies in the report
are just a few, many companies assisted and an even smaller percentage of the over 18,000
businesses in Saratoga County.

“But their impact is impressive. And they are
here because SEDC was the driver for them
to locate here. Yes, they had to have the right
land to build on, yes they had to find the right
employees to hire and yes they had to make
sure that the infrastructure was around their
site and if not get it to the site. SEDC was able
to be the conduit, the ombudsman to solve
those issues.”

“Make no mistake about it, Saratoga County
will continue to grow. We will build more houses
and those houses and the people living in them
will need services. Those people will need jobs.
Good jobs.”

The seven companies and their employees
generate 5 percent of the revenue that goes
into the Saratoga County budget through sales
tax, he said. “Just seven companies employing
over 5,500 people and helping other companies
to employ another 4,200 indirect jobs have
impressive economic impact.”

“How many people moved here because of
GlobalFoundries? More people are moving here
because we have good schools, good quality of
life, low taxes, employment potential, and good
companies.”

The SEDC president said economic development
officials need to understand the concerns
and problems of existing business and be able
to help them remain, grow and invest in the
local community.

“This study shows how well we have done,
and also gives us benchmarks for our future. As
SEDC continues to grow business in Saratoga
County we will look to support our existing
businesses, market to attract new good paying
companies, help our communities build
capacity for future companies to locate here.”

The full study can be found on the SEDC
website, www.saratogaedc.com.