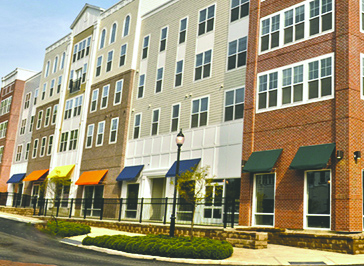 Eugene Rosen, managing partner of the group that owns Ellsworth Commons in Malta, says apartments have rented well and a push is on to get commercial space occupied

The man now in charge of Ellsworth Commons,
the $53-million, mixed-use development
in Malta, sees local restaurants and
retailers as the key to its future success.

Eugene Rosen has been one of the three
owners of the property–on Ellsworth Boulevard
off Route 9–since 2007, but said he
was a “passive member” of the group known
as Albany Partners LLC. Earlier this year,
amid reports that Ellsworth Commons was three months behind in paying its debt,
Rosen, who lives in Florida, took over as
managing partner.

Ellsworth Commons, which opened in
2011 as Malta’s first mixed-use community,
is composed of four buildings containing
312 luxury apartments and about 70,000
square feet of commercial and retail space.

The apartments rented quickly, thanks in
large part to the property’s proximity to GlobalFoundries microchip manufacturing
plant in Malta, and have had a high
occupancy rate for the past three years,
Rosen said.

The commercial space has not been so
popular. Tenants include Myrtle Street
Obstetrics and Gynecology, House of Polish
Nails and Spa, DNS Electronics LLC and
H&R Block, but a good deal of the 70,000
square feet remains vacant.

“One of my primary efforts and goals in
taking over the management of the property
was to expedite the lease-up of the commercial
space,” Rosen said. “I think one of
the problems that occurred initially is that
the marketing was oriented toward more
national types of tenants. And in reality, I
think having 650 tenants right in house, so
to speak, creates a better opportunity for
commercial or retail operations that cater
to the local element.”

He noted that Ellsworth Commons does
not meet the criteria for most national
chains, which look at population density
and other factors set by their home offices.
But he considers it the perfect location for
local retailers and service businesses, such
as dry cleaners and hair salons, as well as
restaurants.

He noted that Malta residents looking for
finer restaurants typically have to travel
to Saratoga Springs, which many do not
want to do in the summer, when the city is
crowded and parking is at a premium, or in
the winter, when weather conditions may
make travel difficult.

“So we are working hard with local
establishments to try to get them to open
in Ellsworth Commons,” he said. “We are
opening a Thai restaurant there, we have a
coffee shop, we have a yogurt shop and we
are very close to putting together an Italian
restaurant and a Spanish restaurant. I can
see it becoming a real mecca not only for
the residents of the apartments but for the people within a couple of miles who want a
spot for dinners and lunches on weekends.”

Rosen said there are varied spaces available,
ranging from about 1,600 square feet
to as much as 5,000 square feet. Because
the space is “vanilla shell,” meaning it has
not been built for any particular purpose,
Albany Partners will offer financial assistance
to help local business owners fit it
to their needs.

“It’s not like it’s ever been built out before,
so it requires taking the newly developed
premises and bringing it to where it’s
got walls and flooring; and for restaurants
to where it’s got their kitchen and meets the
health requirements that go with that, such
as ventilation and duct work and things
like that,” he said. “It is very expensive in
a new facility.”

Meanwhile, Rosen is representing the
same partners in seeking a buyer for a
nearby property at 2458 Route 9, just
south of the roundabout with Route 67.
Ellsworth Commons is just to the north of
the roundabout.

That site, called Blacksmith Square, has
Malta Planning Board approval for a mixeduse
development with 170 apartments and
28,000 square feet of retail space. The
buyer would assume those permits and
could pursue those plans, or could build
something else within the zoning code.

Rosen said a developer from New England
is close to signing a deal for the property,
but could provide no other details. No
local developers expressed an interest,
despite Blacksmith Square’s proximity to
GlobalFoundries.

“The grass is usually greener on the other
side of the fence, believe it or not,” he said.
“That’s why [outside] people see something
that is currently right under somebody’s
nose and they just didn’t see the potential
in it for some reason. That is historically
what happens in real estate.”