We urge everyone to contact individual businesses to confirm their hours of operation before visiting, while we flatten the curve through social distancing.
Home  »  New Businesses  »  Local Woman Starts Business Of Making, Marketing Her Own ‘One With Life Tequila’ 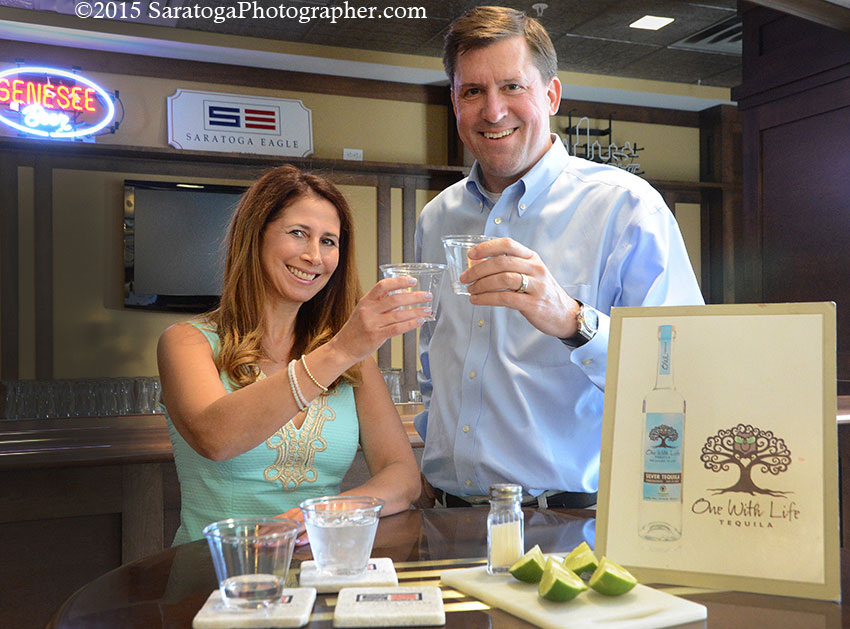 Lisa Elovich, owner and president of One With Life Tequila, and Jeff Vukelic of Saratoga Eagle Sales & Service sample some of her tequila that will officially launch in Saratoga Springs in July

A woman who was once a lawyer, life coach–
even a boxing promoter– is starting her own
business, making and distributing tequila.
Lisa Elovich is the owner and president of One
With Life Tequila, or O.W.L. Tequila, which will
officially launch in Saratoga Springs in mid-July.

Elovich has successfully traveled other career
roads, and was inspired to start the company
because of a desire to live a mindful and peaceful
life, she said.

“As a mother, a lawyer, a state worker, life
coach and entrepreneur, it’s hard to strike a balance
between work and life,” said Elovich. “I was
a boxing promoter for seven years and loved the
excitement of that profession. Tequila has always
been associated with something positive. It lends
itself to the balance and sense of adventure I
crave in my life. It can be good for your health too.”

Elovich had the idea for One With Life about a
year ago, and started taking steps toward turning
the idea into a reality eight months ago. Through
research and visits, she found contacts in Mexico.

She developed a partnership with a distillery in
Mexico. In America, Elovich is working with the
same team of professionals she worked with in
her boxing promotion days.

“Tequila is a lot like boxing,” she said. “The
people who are into it are really into it. It’s a
small, intelligent, passionate crowd. There is
mystique and adventure to tequila, just like there
is to boxing.”

Elovich has found support to be plentiful.
“First I talked to friends and family. Then I
started talking to people throughout the community–
bartenders and restaurant owners primarily–
and there was a strong sense of encouragement
and excitement.” she said. “I conducted
focus groups among friends and acquaintances,
and launched a Facebook Tequila Group–my
‘tequila friends’. They are my surrogate brand ambassadors and have contributed many ideas
to the brand and business.”

One With Life Tequila will be sold with an inspirational
quote inside each bottle. Each six-bottle
case will come with a piece of jewelry that can be
worn as a bracelet or anklet, featuring the company
name and logo of an owl in the tree of life.

Elovich placed high importance on the spiritual
connotations with the One With Life brand.
“I gained a lot of the spiritual context for the
One With Life brand through spiritual readings
on making inner peace our number one priority.
That’s why our slogan is ’99 percent peaceful,
1 percent wild’. The entire tequila concept is a
vessel for spreading a positive message of peace
with self and peace with the moment.”

The brand’s logo, an owl perched in a flowing
tree, is heavy with symbolism. “The Tree of Life
represents eternity and connectedness. The owl
represents peacefulness, courage and wisdom,”
said Elovich.

“Our tequila is better than any tequila you will
ever taste. It’s mild and smooth, with no big burn.
You don’t have to force it down as a shot or dress
it up to disguise the taste. You can make it into a
cocktail if you want, but it’s pleasant enough to
drink alone,” she said.

Tequila is derived from the agave plant and
must be distilled in Mexico to be considered
authentic tequila. One With Life has partnered
with Tequila Las Americas in Jalisco, Mexico.
Elovich commutes to the location twice a year
for bottling and quality control, which includes
tasting a sample from every batch of tequila. The
tequila is certified organic.

With several teaser tequila tastings occurring
in June and July, the official launch party of One
With Life Tequila will happen at 6-8 p.m. Friday,
July 10, at Sperry’s Restaurant, 30 1/2 Caroline
St., Saratoga Springs.

One With Life Tequila is sold online and in
retail stores, bars and restaurants throughout
the Capitol Region. For a list of vendors and
other information, visit www.OneWithLifeTequila.com.