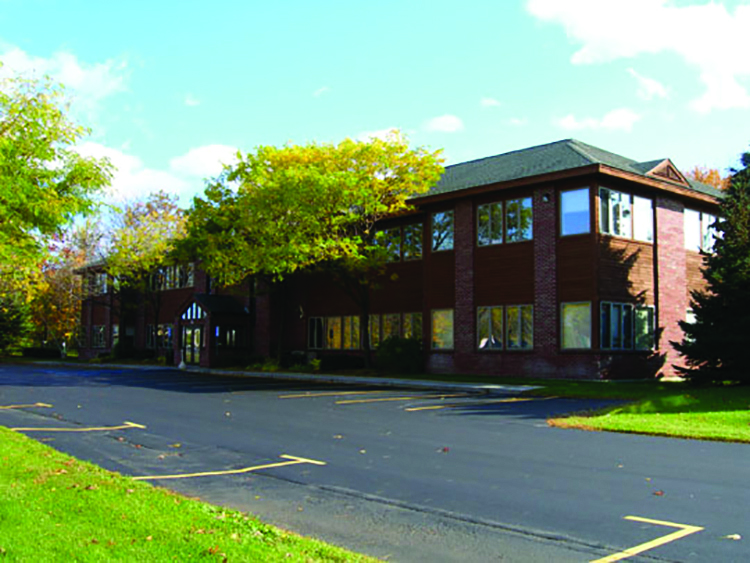 This building at the Park Plaza at 58 Clifton Country Road, will be the new home of the Chamberof Southern Saratoga County. Officials say the downtown location will improve visibility

The Chamber of Southern Saratoga County
is moving to new offices at the Park Plaza at 58
Clifton Country Road, Suite 101 effective July 1.

The Chamber’s plans are intended to provide a
more visible presence in downtown Clifton Park
as well as to provide greater flexibility in office
space and the display of member literature and
other materials.

They are currently located at 15 Park Ave. in
Clifton Park.

“This is a great opportunity for us to redesign
our office space to make the most use of available
resources while better tailoring it to the mission
of the Chamber which has evolved over the past
few years,” said Pete Bardunias, the Chamber’s
President/CEO. “We need more space devoted
to offices and the display of materials, and the
opportunity to move to the heart of Clifton Park’s new downtown will help us have more contact
with businesses and the general public than
ever before.”

An added benefit to the move will be the proximity
to the new Homewood Suites extended stay
hotel which is opening next door in the Clifton
Park Center Mall parking lot.

“When I moved here in 2011, I learned the
value of spending time with other newcomers
to the area and helping them get settled,” said
Bardunias. “We plan to work with all our member
hotels on better serving this audience, and having
one right next door devoted to people moving to
the area and/or here for extended business duties
will be a big plus.”

Brianna Trexler, director of sales for the
Homewood Suites, said “As an extended stay hotel many of our guests are with us for weeks
or even months at a time. Having the Chamber
of Southern Saratoga County as our neighbor will
be such a wonderful resource for our guests staying
long term or relocating to the area. With the
Chamber’s expert knowledge we can get them a
little more familiar with Clifton Park in no time!”

The overall square footage of the new space
will be somewhat less than before, with less space
devoted to conference room and classroom facilities,
although the Chamber will still retain two
conference rooms with a maximum occupancy of
about 35, Bardunias said.

“We had a large classroom because of several
tenants which utilized the space,” he said. “Now,
many of our members have added their own conference
and classroom facilities and we feel we
can better serve members’ needs by holding more
of our classes and seminars at these locations
rather than essentially competing with them to
offer space. These days we are spending more
and more time in the field, which allows us to be
more responsive to the needs of our membership.”

The chamber praised longtime landlord Windsor
Development Co. for the many years they
hosted the Chamber’s space.

“We had to think long and hard about making
a move because we have greatly appreciated the
relationship with Windsor,” said Says Christine
Donohue, vice president of finance and administration.
“They are a great partner, a vital member
of this Chamber and we look forward to continuing
to work with them well into the future.”

Meanwhile, Robert Phillips of Atrium Properties,
the Chamber’s new landlord, expressed
excitement at the prospects of having the organization
move to their office complex.

“We are thrilled to host the Chamber at the
Park Plaza. The Chamber will be in the heart
of Clifton Park’s burgeoning Town Center, which will enhance the Chamber’s visibility and accessibility
to new and existing business owners
and allow the Chamber to shine as a beacon
for entrepreneurship that has made Southern
Saratoga County a leading business location in
upstate New York.”

The Chamber expects a seamless transition
into the new space during the month of June,
and will be hosting a grand opening party later
this summer, details to be announced. More
information will be made available through their
website, www.southernsaratoga.org.