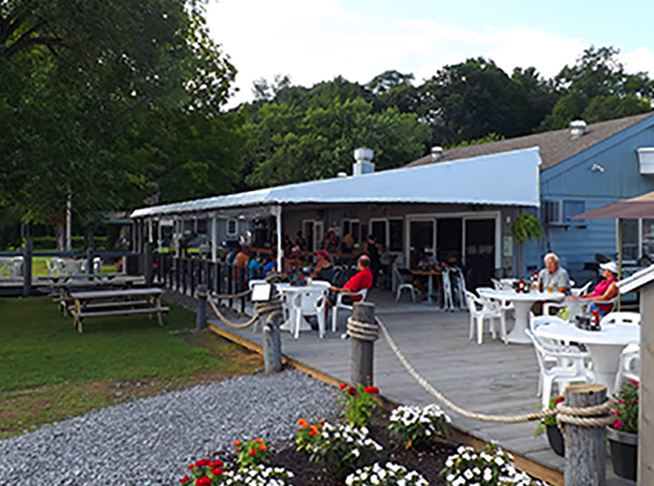 Patrons sit outside on a recent afternoon at Lake Local, on the shores of Saratoga Lake. The bar/restaurant also has kayaks and paddleboards that people can rent to enjoy the lake

Michael Phinney of Phinney Design Group
and business partner Jonathan Haynes have
brought the taste and feel of a neighborhood
bar they own, The Local in Saratoga Springs,
to the Saratoga Lake waterfront.

The new establishment, Lake Local,
opened its doors at the end of July at the
site of the former Tropic Hut. They reported
a successful grand opening on Aug. 1.

The owners did significant renovation to
both the interior of the building and the external
grounds. There are seashore-inspired
blond wood floors and bright white walls
with pale washed out grey accent walls. The
simple contemporary seating adds to the
clean lines of the space and facilitates the
already easy banter and mingling that occurs
among friends and strangers alike.

Stacey Gorman is a loyal fan of the Local,
but had never been to the Tropic Hut. “I
used to think the other place looked a little
run down,” she said. “But, this is a really a
pleasant surprise and a welcome addition to
Saratoga Lake.”

As at The Local on Beekman Street in
Saratoga Springs, the owners of Lake Local
have remained true to their mission of creating
a casual, inviting atmosphere that feels
like “everybody’s living room.”

Beachwear, paddle boarding, and kayaking
are part of the ambiance, along with the
beachside-inspired menu offerings
The Lake Local menu is the result of a
collaboration between chefs Brady Dillon
and Tim James, who has been head chef
at The Local for the past eight years. On the menu are dishes like sesame pepper
encrusted ahi tuna, grilled swordfish with
pineapple slaw, and what Phinney refers to
as their “signature dish,” a steamer bucket
loaded with shellfish, red potatoes, sausage
and corn on the cob.

Breakfast will be served on Saturdays
and Sundays from 9:30 a.m. to noon and will
include specials like crab infused potato pancakes
with two eggs over toast, and a variety
of frittatas. In addition to the standard menu
items, the chefs will plan weekly specials for
Sunday brunch, offered from noon to 3 p.m.

Right next door to Lake Local is the
Board Shop where people can rent a kayak
or paddle board for three hours. They also
offer six- hour packages.

Music is part of the allure of Lake Local,
with live bands performing in the afternoons
and through dinner.

Property manager Matt Rickard is excited
about business since the opening.
“We’ve been averaging about 400 dinners
a night – just during this first week of being
open,” he said.

He also notes the improvements made to
the parking and lawn areas, making it much
easier to park. The lawn area offers another
space for people to relax with food and drink.

Phinney is envisioning lobster bakes in the
future. Now that phase one of the renovations
is complete, Phinney and Haynes are eyeing
phase two, which may include such things as
offering dinner year round.