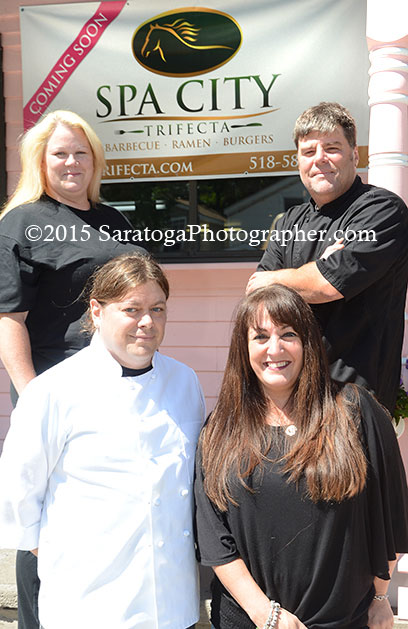 Spa City Trifecta, at 119 Clinton Street in
Saratoga Springs–site of the former well known
Pink Store–will offer a triplet theme of
offerings when it opens Aug. 8.

But, according to owner Albert Feldman,
more important than the triplet theme is the
fact that everything will be made in-house and
“we’re using real food.”
Opening day will feature a live blues guitar
player, he said.

The restaurant, which will seat about 40
people, will offer eat-in and take-out options.
It is located west of Broadway and a few blocks
from the Skidmore College campus. Feldman
anticipates serving students and faculty, as well
as people working in the neighborhood and some
“tourists and foodies.”

He said “there is no place around like it,”
noting the “uniqueness of the dishes” and the
fact that everything will be made from scratch.
The menu will also include Chinese-style
dumplings, salads and vegetarian dishes.

This is Feldman’s first venture into the food
business. He learned to cook and bake in his
mother’s kitchen. He learned from her that “if
you are going to eat food, you might as well eat
the best.”

As the owner, he expects to do a little bit of
everything: work in the kitchen, man the barbeque pit, clean the bathrooms and “everything in between.”

David Hoolihan is the chef and there will be
eight or nine other employees, some full time
and some part time.
Feldman has applied for a beer and wine
liquor license but did not know when it will be
approved.