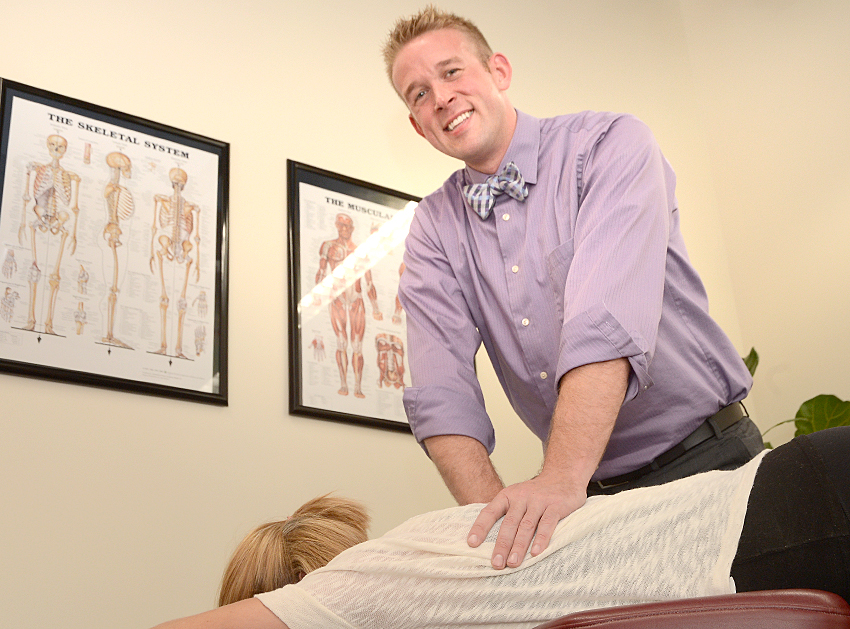 Dr. Adam N. Favro, owner of Turning Point Chiropractic, moved his practice from Ballston Spa to Saratoga Springs where his practice has more space and room for future growth.

Owner of the practice, Dr. Adam N. Favro,
D.C., C.S.C, said he is excited to be in the heart
of Saratoga. Already well known from his former
Ballston Spa location, Favro said the transition
has been nothing but positive.

The new facility is much larger, providing
room for future growth, he said.

Favro started Turning Point Chiropractic in
November 2011 after working in Minneapolis
as the official chiropractor of the Twin Cities
Marathon and Team USA Minnesota. He said
his family is in New York, which is what brought
him back home.

“It had always been home to me so I decided
to move back nine months after graduating and
start my own office,”said Favro.

Favro said it was in Minnesota that his style
of practice was shaped while working with
professional athletes. He said their short visits
taught him to how to make the most out of the
time allowed.

“You only had a short amount of time to work
with a patient and you needed to make every
visit count. I also learned that every patient was
very different. You could have 10 patients come
in with lower back pain and all 10 of them could
be completely different. I learned how to handle
those situations and how to create specific treat-
ments for each patient, every visit,” said Favro.

Favro said he has a commitment to staying
current. Through constant research, he works
to employ cutting-edge therapies, such as active
release.

“Knowing the best way to address and treat
patients allows them to get better faster and stay
healthy longer,” said Favro.

A native of Plattsburgh, Favro received his
bachelor’s degree in biology, with a minor in
chemistry from SUNY Plattsburgh. He then attended
graduate school where he earned his doctorate
at Northwestern College of Chiropractic in
Minneapolis. It was there that he worked with the
University of Minnesota’s medical school. There,
Favro said he learned the value of cooperative
care and a referral based health care system.

“I got some great opportunities to work with
professional athletes while in Minneapolis. I was
also the legislative representative for the Student
American Chiropractic Association and helped
set up meetings between members of the U.S.
Senate and Congress and chiropractors to discuss
national policy and health care reform,” he said.

Turning Point Chiropractic treats patients as
young as a week old to patients in their nineties,
caring for an array of conditions from carpal
tunnel syndrome, to TMJ, dysfunction to runner’s
knee.

Turning Point’s website is www.tpcwellness.com. Its phone number is 584-9500.