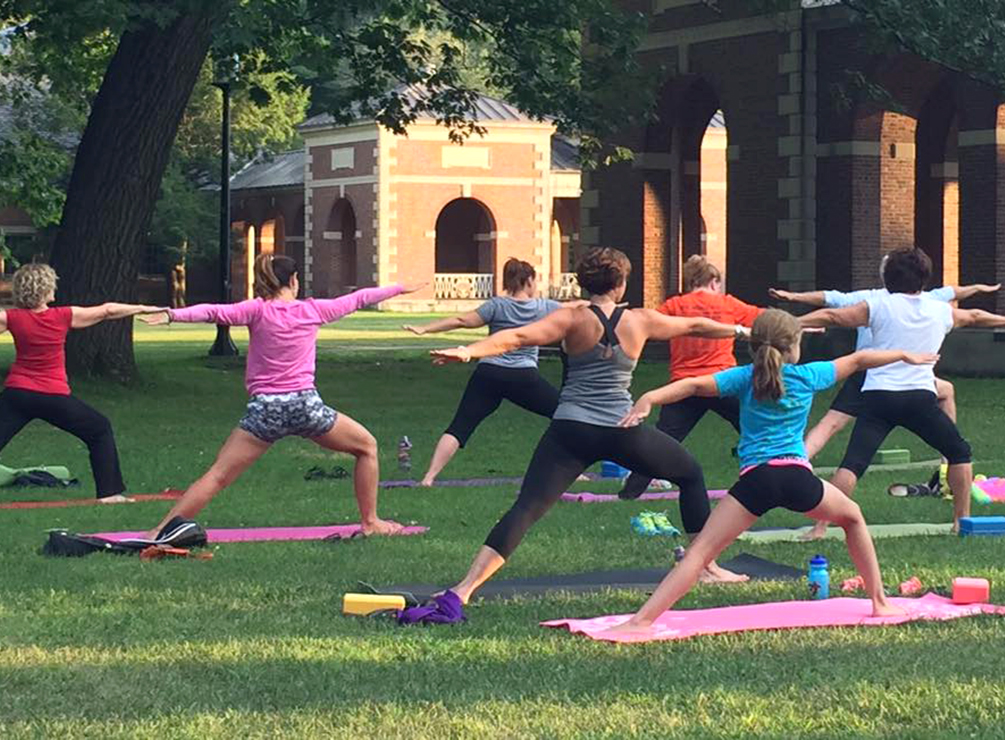 People practice yoga in the Spa State Park as part of Coesa Inc.’s wellness and healing initiatives. The group is restoring a section of the Roosevelt Baths to make it the center of its activities.

The healing and restorative powers of
Saratoga’s mineral springs were revered by the
Mohawk and Iroquois people 400 years before
the colonists learned of them, and more than
700 years before Franklin Roosevelt commissioned
the creation of Saratoga Spa State Park.

The recently formed nonprofit group Coesa,
Inc. is now devoted to renewing and strengthening
the tradition of health and healing that
is an integral part of Saratoga Springs’ mantra
of “Health, History, and Horses.”

Named after a re-discovered and formerly
popular spring in the park, Coesa Holistic
Wellness Center was created in 2014 by a
group of local professional women who are
practitioners of yoga and proponents of holistic
health and wellness. They obtained their
501C3 status in March and began running
programs in April.

The ultimate goal of Coesa is to restore
Roosevelt II, the 18,000-square-foot mirror
building of the Roosevelt Baths, to its original
state and create a center similar to the Kripalu
Center in Lenox, Mass., or the Omega Institute
in Rhinebeck, N.Y.

Roosevelt II has been standing unused and
vacant for more than 30 years. While New York
state committed to making repairs to the roof
in 2013, there is still much work to be done
before the building can be fully re-purposed.

Two local attorneys, Stephanie Ferradino
and Elizabeth Coreno, spearheaded the Coesa
initiative. Having traveled extensively to numerous
healing centers across the country and
around the world, both women recognized
the untapped potential for a similar center in
Saratoga Springs.

With such easy access to Saratoga Springs
hotels and restaurants, a vibrant downtown,
and a variety of other historic, cultural, and
entertainment venues, Coesa board members
feel that Roosevelt II is an ideal location. They
are passionate about strengthening the Spa
State Park’s focus on health and wellness

“After all,” said Coreno, “this was FDR’s vision
for the park in the first place.”

As part of its fundraising efforts, Coesa received
a temporary permit during the summer
to conduct yoga, tai chi, and Qi gong classes
on the park grounds, all of which were well
attended and helped spread the word about
Coesa, she said.

Their largest fundraiser to date was held in
October at the Bowtie Cinema and included
a screening of an independent film, “The
First Line,” which stars Pantelis Kodogianis,
a Saratoga Springs native. The film is about
two Greek lawyers who sue the British government
for the return of the Parthenon marbles.
The theme of the film resonated with Coreno,
who compared it to Coesa’s efforts to return
Roosevelt II to its original state.

Coesa has also applied for a $300,000 state
Park Acquisition, Development and Planning
grant, which is still pending. If they receive the
grant, Coesa will use the money to refurbish
approximately 2,000 square feet in Roosevelt
II, enough to allow Coesa to hold yoga and
other classes there, said Coreno.

In July, the Saratoga Springs City Council
adopted a resolution to support Coesa’s efforts.
The group’s five-year goal is to have Roosevelt
II completely rehabbed and home to
Coesa Holistic Wellness Center.

Just as Native American forebears created
settlements near the “place of miraculous
waters,” Coesa’s vision is to re-establish the
health and wellness component of the park
and create a world renowned center for “holistic
health and personal growth for mind,
body, and spirit” from which all can benefit,
the group states.

For more information about Coesa Holistic
Wellness Center, visit them on Facebook at
Coesainthepark.