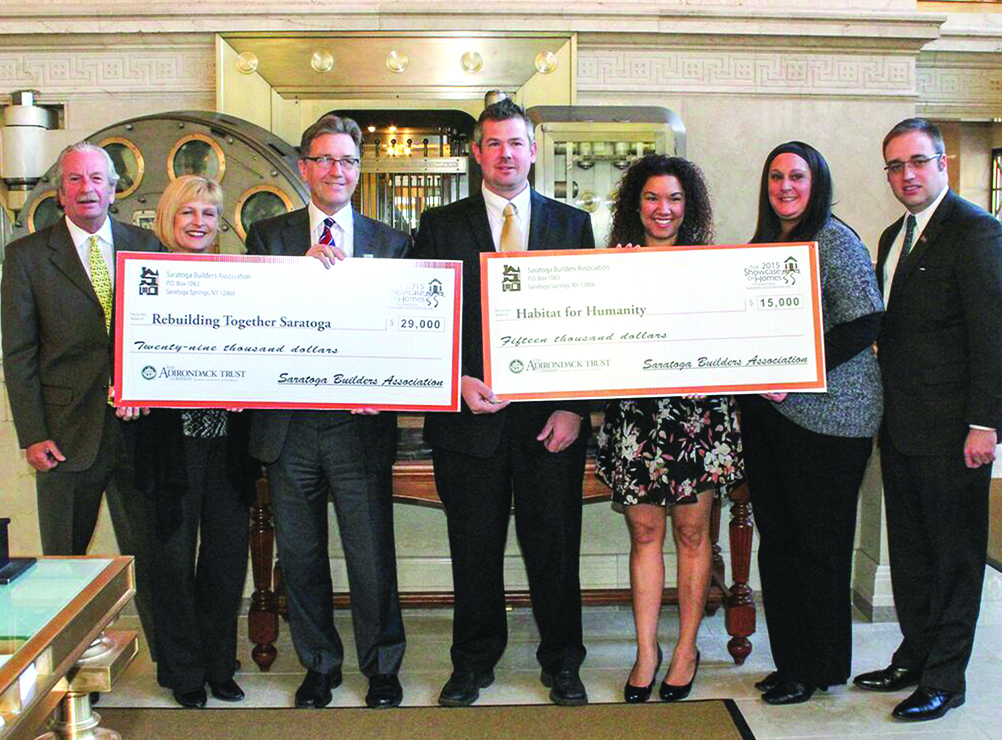 Members of the Saratoga Builders Association presented checks recently to Rebuilding Saratoga
Together and Habitat for Humanity. The money was raised at the annual Showcase of Homes.

The Saratoga Builders Association announced
proceeds totaling $44,000 from the 2015 Saratoga
Showcase of Homes.

The money is being donated to Rebuilding
Together Saratoga County, which will receive
$29,000, and Habitat for Humanity of Northern
Saratoga, Warren and Washington Counties, which
will receive $15,000.

The Saratoga Builders Association, which runs
the Showcase of Homes, has now contributed over
$915,000 to local charities from the event.

The 2015 edition of the Saratoga Showcase of
Homes featured 11 award-winning builders presenting
12 homes.

Officials said nearly 3,000 people purchasing
tickets to tour the new homes on display over three
weekends. It was an opportunity for the community
to preview current trends in building, landscaping,
decorating and interior design.

The builders association also announced the
2015 Saratoga Showcase of Homes “People’s Choice”
award winners, as voted by people who attended the
event. They are: McPadden Builders for the Classic
Home category and Witt Construction for winning
both the Executive and Luxury Home categories.

The 2016 Saratoga Showcase of Homes dates
are set for Sept. 17-18, Sept. 24-25 and Oct. 1-2. For
more details on the homes, builders, award winners,
and virtual tours of every home, visit www.saratogashowcaseofhomes.com.

There are over 70 corporate and media sponsors
who help to make the event possible, organizers
said.