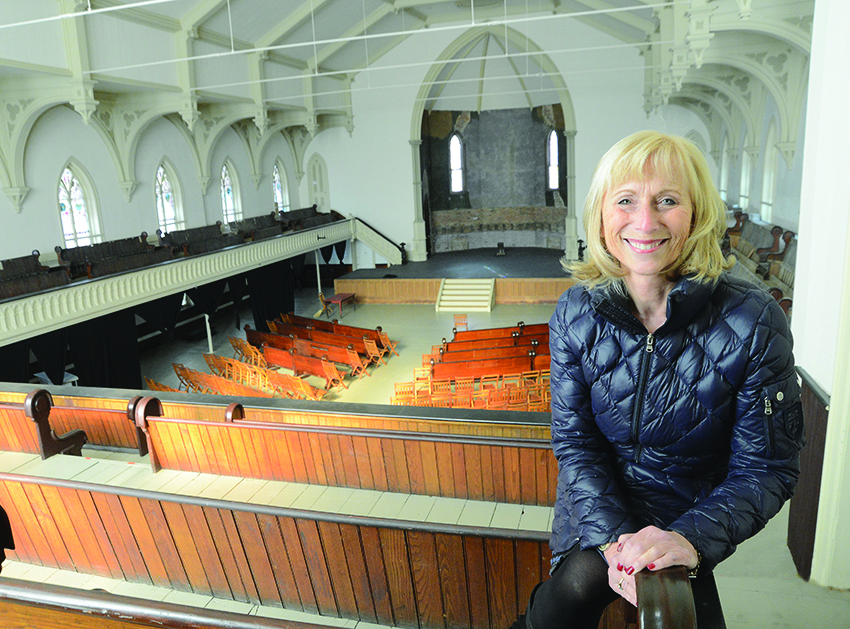 Teddy Foster, campaign manager at Universal Preservation Hall in Saratoga Springs, hopes by
the end of March to meet a $4.3 million fundraising goal for refurbishing the building.

“Saratoga’s living room” is the vision that members
of the Universal Preservation Hall are see as
they go forward with a capital campaign to help
bring necessary restoration to the Washington
Street building a short distance from Broadway in
Saratoga Springs.

Teddy Foster, the campaign manager at Universal
Preservation Hall, sees the building as more than
just a space for entertainment.

“We want to be the cultural, collaborative center
that downtown Saratoga wants and needs,” said
Foster.

There are few venues available for artistic performances
and other cultural events in the city, she said.

In 2015 the Universal Preservation Hall held
more than 25 events, including Electric City Couture,
Chowderfest, and Saratoga ArtsFest. The hall
also caters several weddings each year. The venue
provides a space for all kinds of organizations and
charities throughout the year.

Some of the organizations that have expressed
interest in using the facility include Nacre Dance
Company, Saratoga TechOUT, Leadership Saratoga,
Skidmore College, Opera Saratoga, Caffe Lena, the
Saratoga Shakespeare Company, and more.

“We don’t want just to do great performances,”
said Foster. “We want to be a place of collaboration
for all kinds of artists.”

In order to attract new entertainment and provide
a space for artists, Universal Preservation Hall
is currently undergoing a massive capital campaign
titled “The Road to Opening Night.” The campaign
started in July. The goal is to reach $4.3 million by
the end of March.

Plans are for the hall to close in April for construction
and renovation. The target for reopening would
be September 2017.

The campaign, she said, is “exceeding our own
expectations” so far. The group has also applied for
several grants.

Universal Preservation Hall was originally built
in 1871 as a church. Several important historical
figures have given lectures there, including President
William Taft and Frederick Douglass, the abolitionist
and statesman. The building gradually fell into disrepair.
In 2006, an effort in the community raised more
than $3 million to prevent it from being demolished.

Some of the renovations include adding more
seating to the main event room, to bring capacity
from 400 to 800 people; adding an elevator; constructing
a new lobby that will be surrounded by
glass; installing a heating and cooling system; adding
a dressing room for performers; and installing
lighting and sound systems.

While the staff at Universal Preservation Hall
is excited about the future, there is also a respect
for the past. In the main event room upstairs, the
original stained glass windows remain, as well as
pews for sitting. The venue is studded with pictures
of its history to show how far it has come in a short
amount of time.

Universal Preservation Hall estimates that the
renovations will help them host more than 200
events in the first year after reopening. They also
plan to create six new full-time jobs and support
more than 100 additional Saratoga Springs jobs.

To accomplish this, Universal Preservation
Hall has become an affiliate of Proctors Theatre in
Schenectady.

“Proctors will bring us expertise in programming,
construction and fundraising,” said Foster. “They’ll
help us make our dreams come true.”

Proctors Theatre will bring more diverse events
to Universal Preservation Hall, while still allowing
the venue to cater to the kinds of local programming
it already attracts.

The facility recently hosted a wedding and a dental
assistant graduation. “We are a blank slate here,”
Foster said. “We want to be Saratoga’s living room,
where any kind of event or program is welcome.”

To learn more about Universal Preservation
Hall and the capital campaign “Road to Opening
Night”, visit www.universalpreservationhall.org or
call 584-2627.