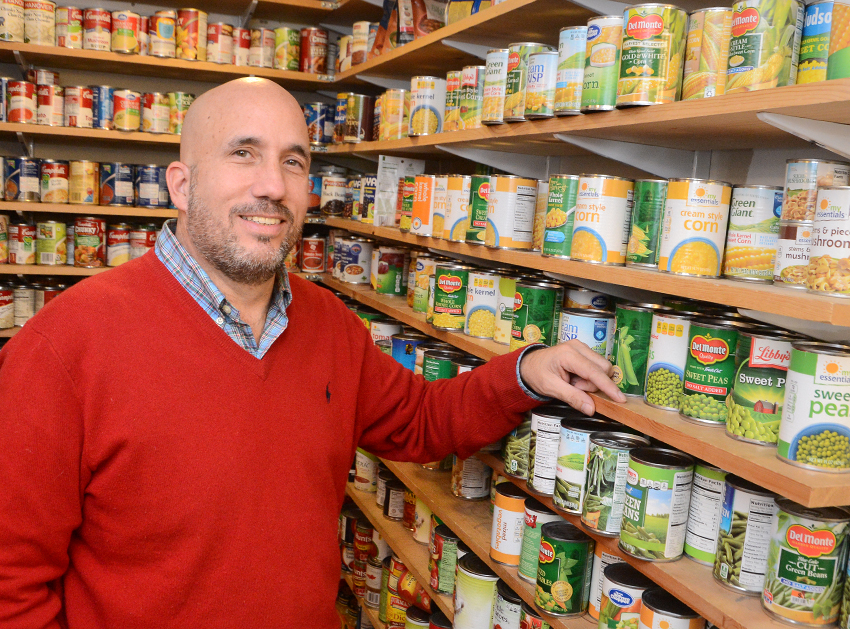 Michael A. Finocchi of Shelters of Saratoga,
stands amid shelves stocked with food.

This is the busiest time of the year for Shelters of
Saratoga, as they gear up for Code Blue and initiate
new programs for the holidays and beyond, Executive
Director Michael A. Finocchi noted.

In addition, more people seek shelter as the
weather gets colder.

Since last August, Shelters of Saratoga has been
the lead agency responsible for Code Blue, a program
that assures the homeless a meal and place
to spend the night out of the elements when the
temperature drops below 20 degrees or snow is in
the forecast. The meals and beds are provided at
the Salvation Army building, 27 Woodlawn Ave.,
Saratoga Springs.

“We don’t know what is coming, but we are set
up and ready to go,” Finocchi said.

Saratoga Gaming and Raceway will once again
stock the Code Blue pantry and a list of local
restaurants and service groups have signed up to
provide meals. Code Blue will again rely heavily
on volunteers but, this year, there will also be a
director and two overnight supervisors staffing
the site. Last year, Code Blue was in effect for 85
nights. Forty-nine of those were continuous, and
volunteers began to burn out, Finocchi said.

Blue lights signaling a Code Blue night are
placed in the window of the Salvation Army, the
Saratoga shelter, and several businesses in town.
Homeless people are “a pretty tight-knit group,”
Finocchi has found, and they also spread the
word. “No one wants to see someone they know
freezing to death.”

Beginning this year, no matter what the weather,
there will be a hot meal and a bed for the night
waiting for anyone who needs it on Thanksgiving,
Christmas Eve and Christmas day. Finocchi
expects to see people, including families, coming
just for the meal. “When it’s a choice between paying
the utility bill and putting food on the table,”
they may turn to the shelter, he said.

Typically, after Dec. 1, 36 people spend the night
at the shelter and another 10 come just for a meal.
The facility is staffed around the clock, all year.

Finocchi said usually, shelter residents are out
of the building during the day, looking for work or
attending to other matters. Beginning this winter,
however, there will be an adult drop-in center
once a week. Between 11 a.m. and 3 p.m., people
can come in, have a shower, do their laundry, have
something to eat and, most important in Finocchi’s
estimation, meet with a case manager. The drop-in
center will be staffed by the outreach coordinator
and volunteers.

Five days a week, an RV goes out from the shelter
to deliver “care packages” to homeless people
who do not come to the shelter. The outreach
program brings food, coats and dry socks, among
other items, to parks and other gathering places.
So far, the RV only makes its rounds during the
day, but it may be extended to some nights as well.

Despite a staff of 22, the shelter “can always
use” volunteers, the director said. They store and
stock donated items, deliver donations to the Code
Blue center and otherwise help out. Donations are
also critical, both cash and such items as clothing,
food, bedding, coats, socks and underwear, boots.

The shelter’s annual budget of about $750,000
comes almost entirely from donations. The annual
appeal was mailed out at the end of November. The
budget is tight but “we make it work because we
have to make it work,” Finocchi said. “By the time
Code Blue is over in the spring, we have just about
used up our money.”

For further information or to donate or volunteer,
call 581-1097.