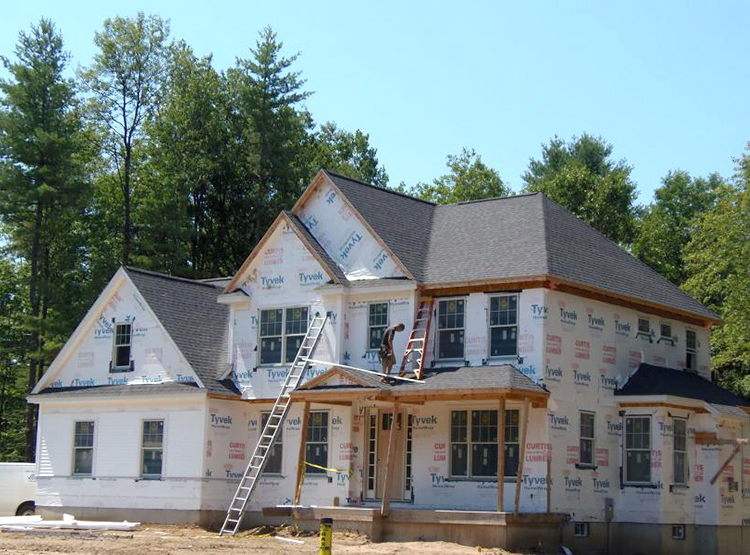 Bonacio Construction has several construction projects underway or going through the approval process, in and around Saratoga Springs.

An apartment complex at 130 Excelsior Ave. in Saratoga Springs is well under way and should be available for occupancy sometime in mid-September or early October, according to Kate Jarosh, business development manager for the company.

She said the project includes 65 one- and two-bedroom units, with an additional 2,700 square feet of mixed use and commercial space.

“We will be offering that space to retail and professional tenants so we can provide services and amenities for this new and exciting community,” said Jarosh.

She touted the convenient location of the new apartment complex, noting its proximity to both the Northway and the downtown shopping and dining area, as well as being walking distance to the Spring Run cycling and walking trail and to nearby Fresh Market grocery store and other businesses in that complex.

Jarosh said that it is a “beautiful property, one that you really need to see to believe.” She said included in the rent are internet/cable, washers and dryers, stainless steel kitchen appliances, and upgraded countertops. There is also a common room and a gym located on the property.

Rent will start at $1,600 for one-bedroom units and $1,935 for two-bedroom units. The property is among the entries in the upcoming annual Showcase of Homes.

Another project located nearby, which Bonacio is calling East & Excelsior, includes plans for a 14-unit condo at 70 Excelsior Ave. in Saratoga Springs

“We are waiting for approval of the offering plan by the state Attorney General’s office,” said Larry Novik, director of business development. “Until we receive approval, we are not allowed to discuss the particulars of the project,” Novik said.

A few blocks away, CaffÃ¨ Lena at 47 Phila St. in Saratoga Springs, is in the midst of a major renovation effort that will increase the size of the venue as well as its accessibility. The project is still on track and the goal is to have the exterior completed by the end of this year, with work on the interior completed sometime in the early part of 2017.

In the interim, the newly renovated Grove at Neumann–a luxury 55-plus living community that Bonacio completed on Lake Avenue–is serving as temporary home to CaffÃ¨ Lena during the renovation, with performers using the Grove’s spacious community living room, and with food being offered by Panza’s Restaurant.

Next door on Phila Street, Bonacio will construct a mixed-use building that will feature an elevator and stairwell shared with CaffÃ¨. The apartment space, with an address of 55 Phila St., will have eight residential units.

Early this year, Bonacio officials anticipated the project could be started completed in large part by the end of 2016, with interior work being finished up into early 2017.

Other projects that are still in the works include the Union Avenue condominiums. Plans to rebuild on the site of the former Skidmore dormitory are also still in the approval process, according to Novik.

The plan is for units to be built after the demolition of Moore Hall at 28 Union Ave.

Bonacio is teaming up on the project with Norstar Development of Buffalo, pending approval. Norstar is the owner of the former Skidmore dormitory, which they purchased from Skidmore in 2009 for $1.12 million.

Another project in the works for Bonacio includes Pine Brook Landing, offering “estate” type living on lots ranging from one to seven acres. Located just off Exit 15 of the Northway, the homes will offer easy commuter access, as well as convenient shopping nearby.

Custom plans are available and the three-five bedroom homes will start at $500,000.