The Saratoga Builders Association announced the development and launch of a new website www.saratogashowcaseofhomes.com.

It has been redesigned for a significantly improved experience with many more features. The site is mobile-friendly with an enhanced interactive Google map for driving directions and house locations.

A special “taste of showcase” preview at sixselected homes in close proximity to one another is scheduled for Friday, Sept. 16 from 5-10 p.m. It will feature food samplings from area chefs along with local craft beer and wine tastings.

The restaurants participating are: 15 Church, 2 West, Augie’s, Jacob & Anthony’s, Lake Ridge and Osteria Danny. There will be a limited number of tickets, available at $25 each. The combination pack of the showcase preview event and a regular Showcase of Homes ticket will be $40 each.

GlobalFoundries is the title sponsor of the event, which last year raised over $35,000 to support the Saratoga Rural Preservation Corporation’s VETHELP and Malta’s emergency first responders.

Organizers said the event is a way to give back to the veterans and EMS responders. As participants go out on the course, the marshals helping direct traffic will be mostly comprised of volunteers from the vet home in Ballston Spa.

The event starts at Hudson Valley Community College TEC Smart located within NYSERDA’s Saratoga Technology & Energy Park (STEP). The course then takes participants south through Luther Forest Technology Campus (LFTC) and by the new Malta recreation ball fields. Once through LFTC, participants run through the GlobalFoundries campus. Almost one mile of the 3.1 miles will be on GlobalFoundries campus.

Once through the campus, participants finish back through STEP and TEC Smart. Participants are encouraged to stay after the event to enjoy post-race food provided by Hannaford. Also, tours of HVCC TEC Smart will be available throughout the morning.

This is part of the Saratoga Stryders running group’s 2016 grand prix. Fleet Feet Albany/Adirondack is the official prize sponsor, providing cash prizes to the overall male and female winners. There will be over 70 award categories of all ages donated from local companies. After the race, participants can stay in Malta for the 8th annual Community Day at Shenantaha Creek Park.

Richbell Capital and Blue Skies Forever LLC have formed the Adelphi Hospitality Group (AHG), a company that aims to develop four- and five-star restaurants and hotels in strategic locations in the U.S. and overseas.

AHG has partnered with globally recognized chef and restaurateur Chef Gray Kunz, to assist in the creation of the food and beverage side of the business. He will oversee the dining experience at all AHG locations.

Michel Ducamp will also join the AHG team as the chief operating officer, bringing over 30 years of corporate, multi-property and property-based experience in luxury hospitality and real estate management, according to the group.

The first AHG opening was Salt & Char, a modern luxury steakhouse in Saratoga Springs. It opened the first weekend of July with Executive Chef Braden Reardon.

Reardon joins Salt & Char with over a decade of experience at some of America’s finest restaurants and hotels. Reardon comes from Manhattan, where he was executive chef of NYY Steakhouse.

Adjacent to this restaurant, the principals have acquired and are currently refurbishing the Adelphi Hotel, which the company expects will open in spring 2017. Originally built in 1877, the newly renovated Adelphi Hotel will blend old world grace and its Victorian grandeur with today’s expectation of quality, attentive service and contemporary amenities to create the ultimate hospitality experience, AHG officials said.

“As the last surviving hotel of Saratoga’s Golden Age, beauty and appreciation is found everywhere–from the preparation of every culinary dish to the intentional design of the hotel’s spaces–the Adelphi aims to reinvent the style of Saratoga Springs’ bygone era luxury as modern luxury,” the company said. 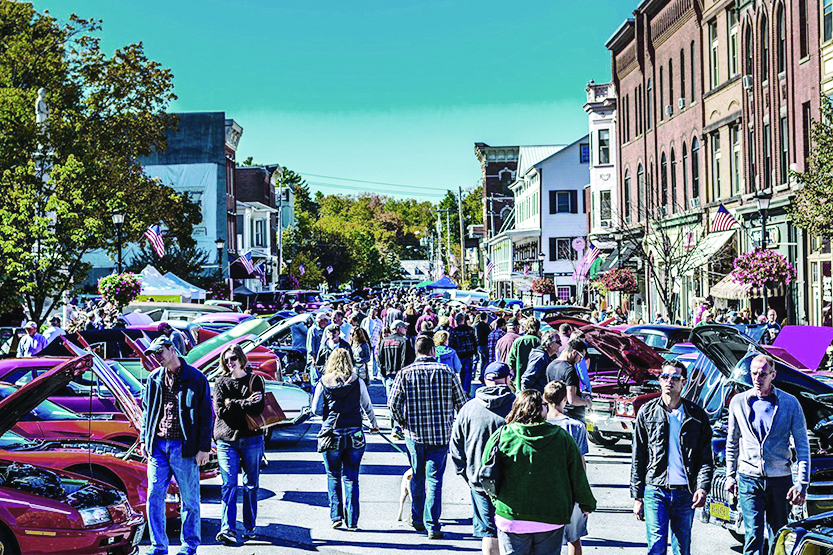 People crowd Front Street in Ballston Spa at last year’s The Way We Were car show. This year’s edition, sponsored by the Ballston Spa Business & Professional Association, is Oct. 9.

The Ballston Spa Business & Professional Association (BSBPA) and Saratoga Automobile Museum will present the 14th annual The Way We Were car show on Sunday, Oct. 9, from 9 a.m. to 4 p.m. on Front Street in Ballston Spa.

“We are delighted to be sponsoring another year of The Way We Were car show in Ballston Spa,” said Donna Dardaris of the BSBPA, a member of the show’s leadership team.

“We will once again be partnering with the Saratoga Automobile Museum to help make the show even greater,” she said. “We invite the public to come stroll our historic village, check out the hundreds of cars and trucks on display, and enjoy the music, vendors and downtown businesses. It’s a great day for the whole family.”

Front Street will be blocked off from Milton Avenue, past the Old Iron Springs, to accommodate car exhibits and vendors. In addition to food and merchandise vendors, the show will again feature a Kids Zone, located by the Old Iron Springs, which will feature several free children’s activities.