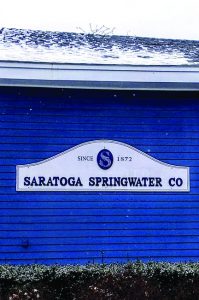 Saratoga Spring Water Co., 11 Geyser Road, Saratoga Springs, which dates to the 19th century in the Spa City, has been sold to a Connecticut investment firm.

BlueTriton Brands, Inc. announced in late November that it has successfully completed the acquisition, a nationally recognized producer of premium domestic spring water.

Saratoga Spring Water  is sold throughout the United States and delivers spring water products in premium packaging to customers in the hospitality and retail channels.

“We are thrilled to welcome Saratoga Spring Water Co.’s products into the BlueTriton family,” said Tony W. Lee, managing partner of One Rock Capital Partners, LLC and a member of the board of directors of BlueTriton. “As a leader in the premium spring water segment, the Saratoga Spring Water  business enables us to expand our brand offerings and access a national, upscale beverage market that will contribute to BlueTriton’s strategic growth and success.”

Adam Madkour, the CEO and sole shareholder of Saratoga Spring Water Co., said “We believe BlueTriton’s leadership and resources will position Saratoga Spring Water’s products for growth while enabling the company to continue producing the high-quality, premium products we are known for. We look forward to our partnership with BlueTriton, who shares our commitment, mission and long-held philosophy of service and corporate responsibility.”

Madkour took over the company in 2001, having worked as an executive there for many years. He worked to expand the market for its sparkling and non-sparkling water, capitalizing in part on the cachet of the Saratoga name and on their distinctive blue glass bottles.

The company had been bought and sold several times and had been owned at one point by Anheuser-Busch, which sold the company to Evian Waters of France. In 2000, it was sold to a Connecticut investment firm, North Castle Partners.

Latham & Watkins LLP acted as legal counsel to BlueTriton. Financial terms of the transaction were not disclosed.

KPMG Corporate Finance served as the advisor to Saratoga Spring Water Co. in the transaction.

Based in Stamford, Conn., with approximately 7,000 associates in the United States and more than 230 in Canada, BlueTriton Brands manages natural resources for long-term sustainability, and conserves more than 20,000 acres of natural watershed area.

It currently sources water for six regional spring water brands from 42 springs throughout the United States and Canada. BlueTriton officials said the company is also committed to creating shared value and being a good neighbor in the more than 120 communities where it operates in the U.S. and Canada.

Saratoga Spring Water was founded in 1872. Originally founded as Saratoga Vichy, the company began bottling the distinct natural spring waters for which the area is known.

Today, Saratoga Spring Water is sold throughout the United States and internationally and is served in some of the world’s finest restaurants, hotels, resorts, grocers, and cafeterias, according to the company.