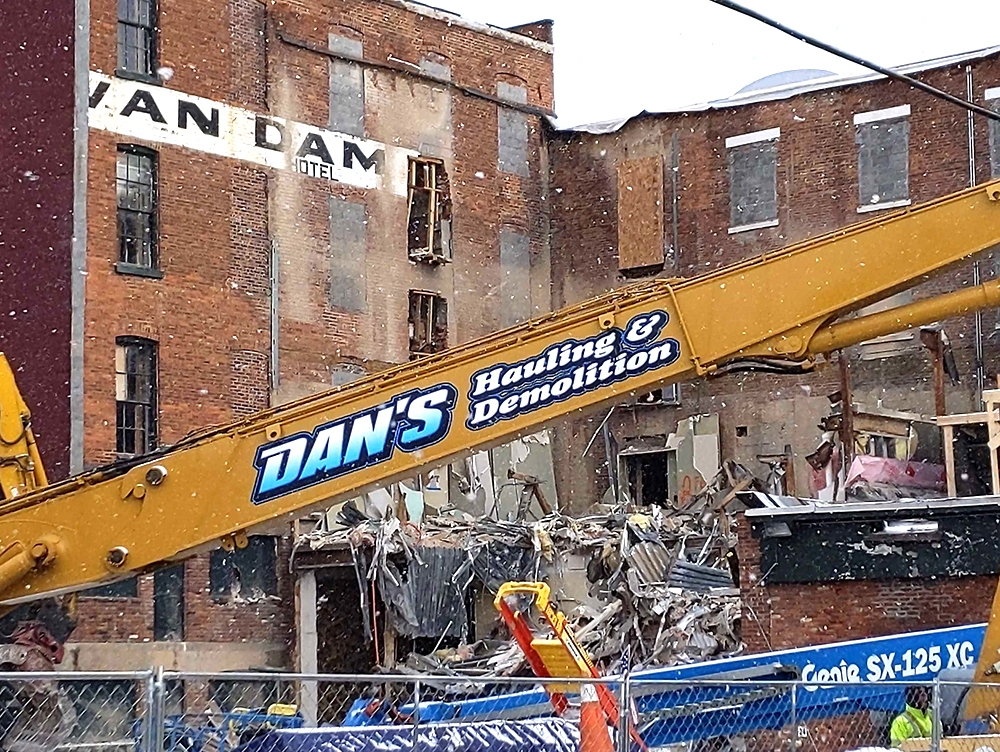 Work is proceeding “slowly but surely” on the conversion of two of Saratoga’s grand old hotels into a resort hotel and apartments, said Helen Watson, general manager of the Adelphi Hotel.

When completed, the Adelphi and Rip Van Dam hotels at 365 Broadway and in Saratoga Springs will be one unit with a five-story addition behind the current buildings and some 100 underground parking spaces.

Real estate developers and thoroughbred racehorse owners Michael Dubb and Larry Roth recently gained the city’s approval to begin a $50 million project. They intend to renovate and expand with the goal of reviving a piece of the luxury grand hotel era that once made Saratoga a playground for the wealthy dating back to the 1870s.

Plans are for a total of 78 hotel rooms along with 84 one- and two-bedroom apartments. Both in-house restaurants will be enlarged and work is already underway on that part of the project, said Watson.  Both apartment and hotel residents will have access to concierge services, a gym and spa and a ballroom. Being downtown, they will have easy access to shops and restaurants.

Renovation work is almost complete on the Salt and Char, the Rip Van Dam’s restaurant.Watson expects it to reopen next year toward the end of November. Renovation work is also underway on the other restaurant, Morrissey’s, which is in the Adelphi space. It will be doubled in size and, “hopefully,” the addition will be ready for diners by the beginning of 2022, Watson said. Outdoor seating and part of the restaurant have remained open.

The five-story addition will be constructed on currently vacant land behind the hotel, fronting around the corner on Washington Street. Watson expects an early 2022 groundbreaking for that part of the project. She estimated the building could be completed by the end of 2023. Rentals in that section  are estimated at $2,000 to $5,000 a month.

The existing Rip Van Dam is also getting a complete makeover. Watson expects the new rooms in that part of the project to be open for the summer of 2022.

The Adelphi was renovated four years ago and has been operating during the work on the rest of the complex. Business was record-breaking last summer, “really amazing,” according to Watson.s

The owners, Dubb and Roth, already invested some $28 million in renovation of the Adelphi.  Dubb is founder of Beechwood Homes on Long Island and Roth is the former owner of Marchon Eyewear Inc., one of the world’s largest eye care companies.

The owners plan to stay on and manage the resort after the work is completed.

In recent years, plans to restore the Rip Van Dam have failed. Bruce Levinsky, a developer from Massachusetts, tried first. He moved to Saratoga and tried to transform the Rip Van Dam starting in the late 1990s. After Levinsky retired and moved to Georgia,  brothers James and Thomas D’Iorio from from Westchester County came in four years ago. Their plan attempted to convert the Rip into a 159-room Hotel Indigo with a 200-seat banquet hall. They lost the property in foreclosure before anything was built. That was 2019 and that’s when Roth stepped in to buy it.