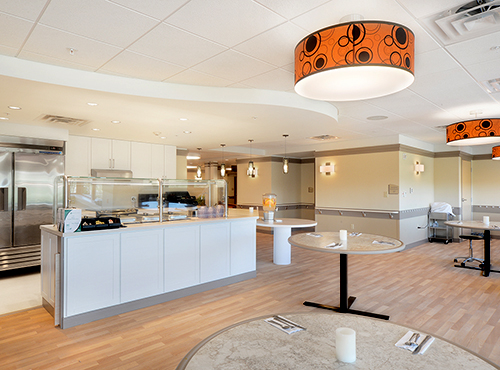 Improvements and enhancements at the Wesley Community’s Springs building include this upgraded dining area. Enhancements began in 2015 and more are scheduled over time.

The Wesley Community in Saratoga Springs, a provider in housing and services for independent seniors and those requiring all levels of care, recently unveiled a series of enhancements and improvements to its Springs building.

The renovations to the fifth floor of the Springs building increase the amount of private rooms from four to 17, officials said. The redesigned floor includes an upgraded dining room, warm and inviting common spaces with gas fireplaces, new LED lights to make the space brighter, and an improved air circulation system that will increase resident comfort.

Resident rooms on the fifth floor have received a substantial upgrade as well. Each room now features an updated bathroom with shower, new furnishings, and a flat-screen television. Meals will now be delivered from a centralized kitchen that is also accessible to residents.

Meredeth Conley, an aesthetician at North Country ENT and MedSpa, applies a facial treatment to a client. The business has added a spa treatment feel in addition to providing medical services.

Just as the change in name suggests, the business has evolved into more of a spa retreat feeling, according to office manager Claire Hensler.

Dr. Robert Hughes and staff are now not only ear, nose and throat specialists, but offer a full holistic treatment service spa as well.

According to the Skin Cancer Foundation of America, an estimated 76,380 new cases of invasive melanoma will be diagnosed in the U.S. this year. Some 10,000 of which will be fatal. It is the fifth most common cancer in men and the sixth most common in women.

“Every time you step outside without wearing appropriate clothing or sun block you are putting yourself at risk,” said Starnes, a surgical specialist with advanced training and experience diagnosing and treating skin cancer whose office is in Saratoga Springs.

He said there are three types of skin cancer. The first two are basal cell and squamous cell, which are less serious and are often found on the nose and cheek areas. The third type is melanoma, which can develop anywhere on the body usually 10-15 years after the initial sun damage occurred and can be deadly.

Wayne Morris, 70, of Greenwich, said it was discovered that he had melanoma approximately the size of a quarter on his scalp.

“I happened to be at my yearly physical when my physician first saw the lesion on my head. He sent me to Dr. Starnes who saw me immediately and diagnosed and removed what we now know was a very serious case of melanoma,” said Morris, who credits Starnes and the advanced technology used to make a quick diagnosis, which resulted in a positive outcome.

The month of June is National Employee Wellness Month and the Saratoga County Chamber of Commerce and BlueShield of Northeastern New York are co-hosting events designed to encourage Saratoga County's employers and employees to take action to improve their...

The Lyme Action Network is working with Saratoga Farmers' Market to encourage local youth to become better educated about tick-bite prevention and Lyme Disease through a poster project and education session at the market. Students of any age are...

Saratoga and Glens Falls hospitals have begun discussions to identify possible opportunities for alignment and collaboration that could benefit the patients and communities served by both organizations. In separate recent meetings, the Saratoga Hospital Board of Trustees and Glens Falls...

The White House announced on April 1 that more than 7 million Americans have signed up for health plans under the Affordable Care Act. Congressional budget analysts had long forecast that 7 million people would get coverage this year...