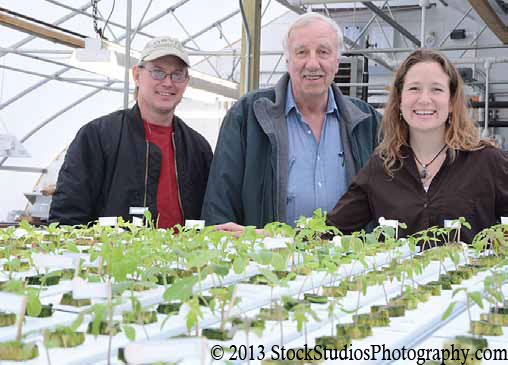 Kelly Hanlon, right, overlooks the plants she is raising in a method called aquaponics with her father, Fred Zilm, center, and David Ayers, who renovated the greenhouse

Kerry Hanlon is in the process of launching
a dream business called Adirondack
Aquaponics.

She said she had “babysat” a friend’s
hydroponic system–a system that grows
plants without soil–more than 10 years
ago and was intrigued. She then learned
about a system called aquaponics that
combined aquaculture (raising fish)
with hydroponics to raise plants whose
roots are nourished in the highly-filtered
nutrient-rich water fertilized by the fish.

Hanlon got the idea to raise salad
greens for local families and restaurants.
She thought the greenhouse located on
land she and her husband, Matt Hanlon,
owned on Old Conklingville Road in Hadley
would be a likely location for such an
operation.

Motherhood intervened, however, and it became more important to build a house on the property. Now that their younger daughter is nearly ready for kindergarten, the greenhouse has been renovated by kerry’s dad, Fred zilm, and friend, Dave Ayers. (Matt Hanlon has an antiquities restoration business of his own, which kerry helps to manage.)

The wood boiler used to heat the Hanlon’s adjacent home now also provides the majority of heat for the greenhouse, with a propane back-up system that kicks in occasionally during times of extreme cold.

When eight pallets of equipment arrived from Wisconsin, zilm and Ayers helped to assemble the fish tanks, filtration system, and plant raft tank. They also installed the means of distributing the wood boiler’s heat and the electrical systems in the greenhouse.

Cooling in the summer will be afforded in part by retractable sidewalls in the greenhouse with fine screens to keep insects from sharing in the harvest of various kinds of greens, Hanlon said.

Raised wooden walkways to facilitate reaching down into 200-gallon fish tanks and servicing other components of the system were also built by zilm and Ayers. Kerry’s mother, Lois zilm, lends a hand with cleaning the greenhouse.

Entering into the greenhouse, one sees a number of blue plastic tanks. The tank closest to the door holds six-week-old baby tilapia fish. Two other tanks hold hybrid Nile White and Blue tilapia adults. Two additional tanks will hold the babies when they have grown.

Kerry Hanlon considers herself fortunate to have such healthy fish that, out of 500 babies shipped to her, only one did not survive shipment.

Water from the fish tanks is passed through a filter tank. Solid fish waste settles to the bottom of the tank and is removed to a holding tank, she said. The nutrient-rich water that remains is then sent through a “bioreactor” where the water, laden with beneficial bacteria, is aerated and then passed along to the area where the first batch of seedlings is growing.

The seedlings, planted in cubes of rockwool, a kind of fiberglass, represent a variety of salad greens, including arugula, mesclun, dill, basil, endive, red lettuce, and mustard greens, among others, she said. When the plants have grown, they will be moved onto a food raft floating in a tank, about half the surface dimensions of the average backyard swimming pool, with roots still in nutrient water carried under the walkway in radiant tubing, to make way for other seedlings.

Upon first harvest in mid-March, family and friends will be sought to taste-test the greens and to help in decisions on what to continue producing for sale to local restaurants and households, according to Hanlon. She noted that aquaponically raised greens she has sampled were especially hearty and tasty. Greens harvested for sale should be ready by May. She expects about 10 percent of her sales will be adult tilapia. The first tilapia harvest will be in mid-April.

Adirondack Aquaponics intends to keep sales as local as possible, she said, focusing on “year-round fresh produce coming off Antone Mountain.” They can be reached at 696-4400 or at adkaquaponics@gmail.com