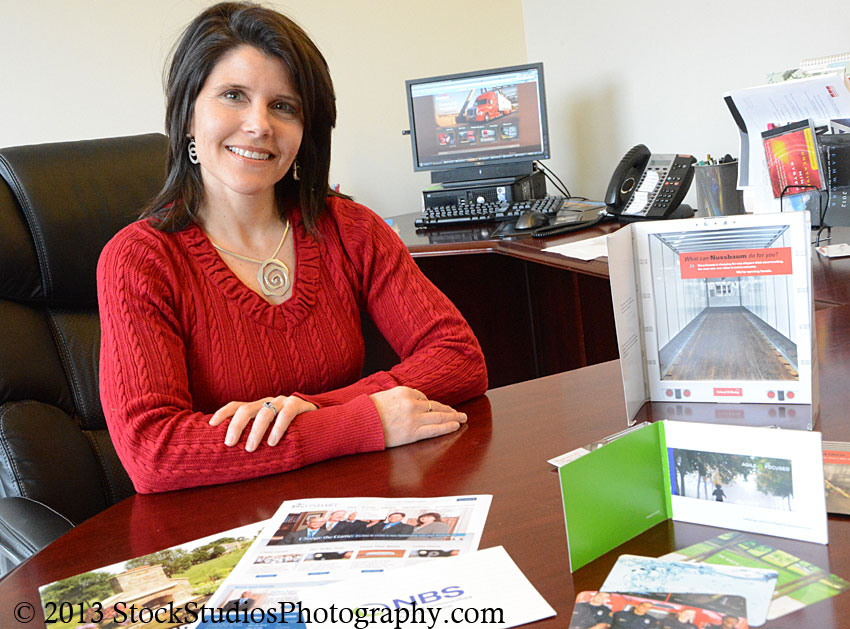 Theresa Agresta, at her desk in Saratoga Springs, and her sister Cynthia Forstmann of Eagle, Colo., operate a marketing firm using ‘Jungian archetypes’ to formulate strategies

Allegory Studios in Saratoga Springs is a marketing company that specializes in branding using a methodology that is part psychology, part anthropology and part mythology.

The owners refer to it as “archetyping,” and it is based upon the Kenexa Cultural Insight Study.

The business is owned by two sisters, Theresa Agresta in Saratoga Springs and Cynthia Forstmann in Eagle, Colo. Forstmann was a psychology student in college and is familiar with Jungian archetypes.

They both began as freelance marketing consultants, found themselves morphing into a “virtual company,” in Agresta’s words, and made it official by incorporating in 2001.

They have four employees and expect to hire two more later in the year. They work with other companies to produce much of the product–websites, brochures, etc.–provided to their clients.

Allegory begins a project by looking at a company’s or organization’s culture.
“What are their passions?” they ask. “We begin by understanding who they are, what they do and how they do it,” said Agresta.

Then, they assign one or more of 12 archetypes to the company or organization: ruler, creator, innocent, sage, explorer, revolutionary, magician, hero, lover, jester, everyperson or caregiver.

The Saratoga County Chamber of Commerce, for example, was pleased to learn it is driven by the hero and explorer archetypes.

“They are willing to reach out to people and explore new ways of doing things for their members,” Agresta explained.

Southwest Airlines was characterized as a jester because of its passion, spontaneity and sense of fun, she said. Dunkin’ Donuts, on the other hand, was assigned the everyperson archetype because it is non-exclusive, everyone belongs, and everyone can enjoy “the average cup of joe” the chain offers.

Using the archetype as a guide, Allegory helps the client tell its story. They then create a platform, such as a website, a blog, social media, trade show materials, or print materials, to articulate that story and develop content to get the client’s story out to its target audience.

Lastly, they track the results and refine the approach.

One such end product is a video on YouTube developed for the Saratoga County Chamber of Commerce. Called “We Believe,” it was developed as a fund-raising tool and was shown at the chamber’s 95th annual dinner. Chamber members, pictured at their places of business, make statements about the chamber’s recent accomplishments.
Allegory did not produce the video but, according to Agresta, “we provided the language for it.”

Although based in Saratoga Springs and Eagle, Colo., Allegory does work for clients throughout the United States. Agresta finds that the two offices can work together and service their far-flung clients seamlessly, thanks to use of the Internet, Skype, and other virtual tools. For example, the sisters share a telephone system and each one knows when the other is on the phone.

Asked how they keep track of it all, Agresta laughed and responded, “We’re women. We’re used to multi-tasking.”

“We are really passionate about what we do and we love what we are doing,” Agresta said. The company’s archetypes are creator and sage. “Our first response to the world is to apply the creative process, to create something that makes sense for people.”
For clients who do not want the full psycho-anthropological treatment, Allegory also provides more traditional marketing services such as website design, video development, or advertising campaigns. They also offer one-day branding workshops and on-site focus groups.

Agresta lives in Wilton. Her office is in Saratoga Springs at 433 Broadway, Suite 203, upstairs from the Putnam Market. She has been there for about a year and is, she said, “getting to know people locally and sees a lot of potential for us here in Saratoga.”

She serves on the board of the Saratoga County Chamber of Commerce. From the back of her office, which is at grade level, she can look out at the new parking garage, a recent project promoted by the Chamber. Her office is one of the first businesses people see as they walk from the parking garage to Broadway.

The telephone number is 580-1987. The website, including cartoon representations of the 12 archetypes, is www.allegorystudios.com.