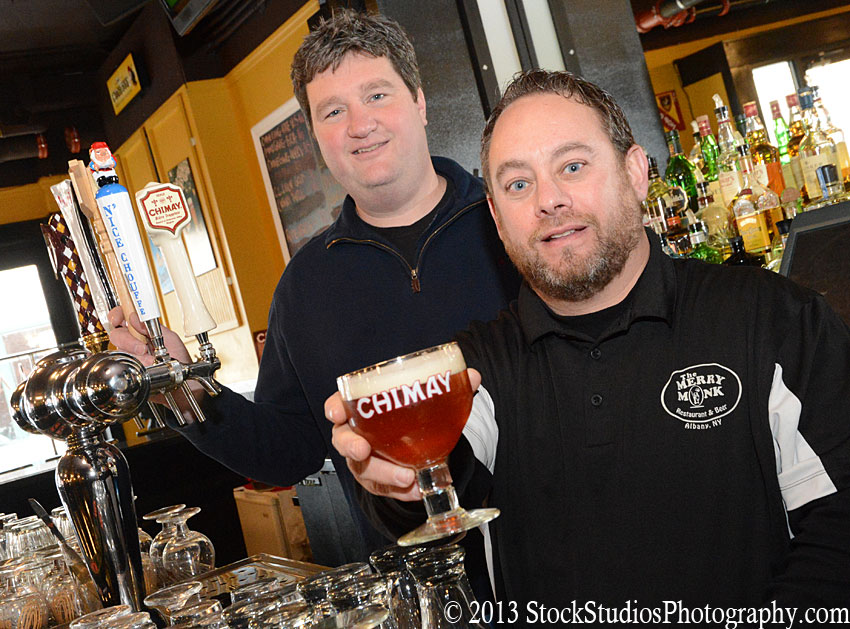 Jerry O’Brien, left, and Joe Gorman are part of the ownership group of the Merry Monk restaurant and pub offering a wide selection of Belgian beer and specialty foods

With a family history in the restaurant and pub business, restauranteur Jeremy O’Brien wanted to open “something different.”

After visits to Belgian-style cafes in New York City and Philadelphia, and also “loving the beer,” O’Brien decided to open an establishment in the Capital Region.

“I saw a part of the market that needed to be represented,” said O’Brien.

In December 2011, the first of his Merry Monk establishments opened at 90 North Pearl St. in Albany.  The restaurant quickly found its niche, offering a wide selection of Belgian beer and specialties such as frites, mussels, and Belgian waffles with sweet toppings for dessert.
Just two years later, in February, The Merry Monk opened its second location at 84 Henry St. in Saratoga Springs. The restaurant is in the location previously occupied by the restaurant Tiznow, and neighbors the new Henry St. Taproom and The Parting Glass across the street.

“I think it’s a great thing being on Henry Street together,” said O’Brien of the pubs.  “The Henry St. Taproom specializes in microbrews, the Parting Glass is a traditional Irish pub, and we focus on Belgian specialties.  Together we’re creating a destination street.  We complement each other.”

O’Brien said Saratoga Springs residents often traveled to the Albany location and indicated “they wished their community had a Merry Monk of its own.” O’Brien said he “saw a great opportunity when the Tiznow space became available, and now has a second location double in size to the original Merry Monk.”

The new pub operates similarly to the Albany site, offering a weekly special of “two for one mussels” on Wednesdays, along with a beer selection of 17 drafts on tap and approximately 100 bottled beers. The restaurant is also decorated with The Merry Monk’s famous gnomes–plastic, life-size statues that serve as the mascots of the Achouffe Brewery in Belgium.

“Everyone just loves the gnomes,” O’Brien said, claiming he has had to keep a watchful eye out for potential “gnome thieves.”

The gnomes “are part of the restaurants, and have become our company mascots,” he said.

The Merry Monk’s menu features three-quarter-pound burgers, a variety of salads, entrees such as pan roasted rogue duck breast, Flemmish-style cod and frites served with a variety of dipping sauces.

The restaurant is also known for its popular mussel dishes, offering diverse styles of the “national dish of Belgium,” such as classic meuniere, dijonaisse, and Thai.

For more information about The Merry Monk Saratoga, call 584-6665 or visit the website at www.merrymonksaratoga.com.