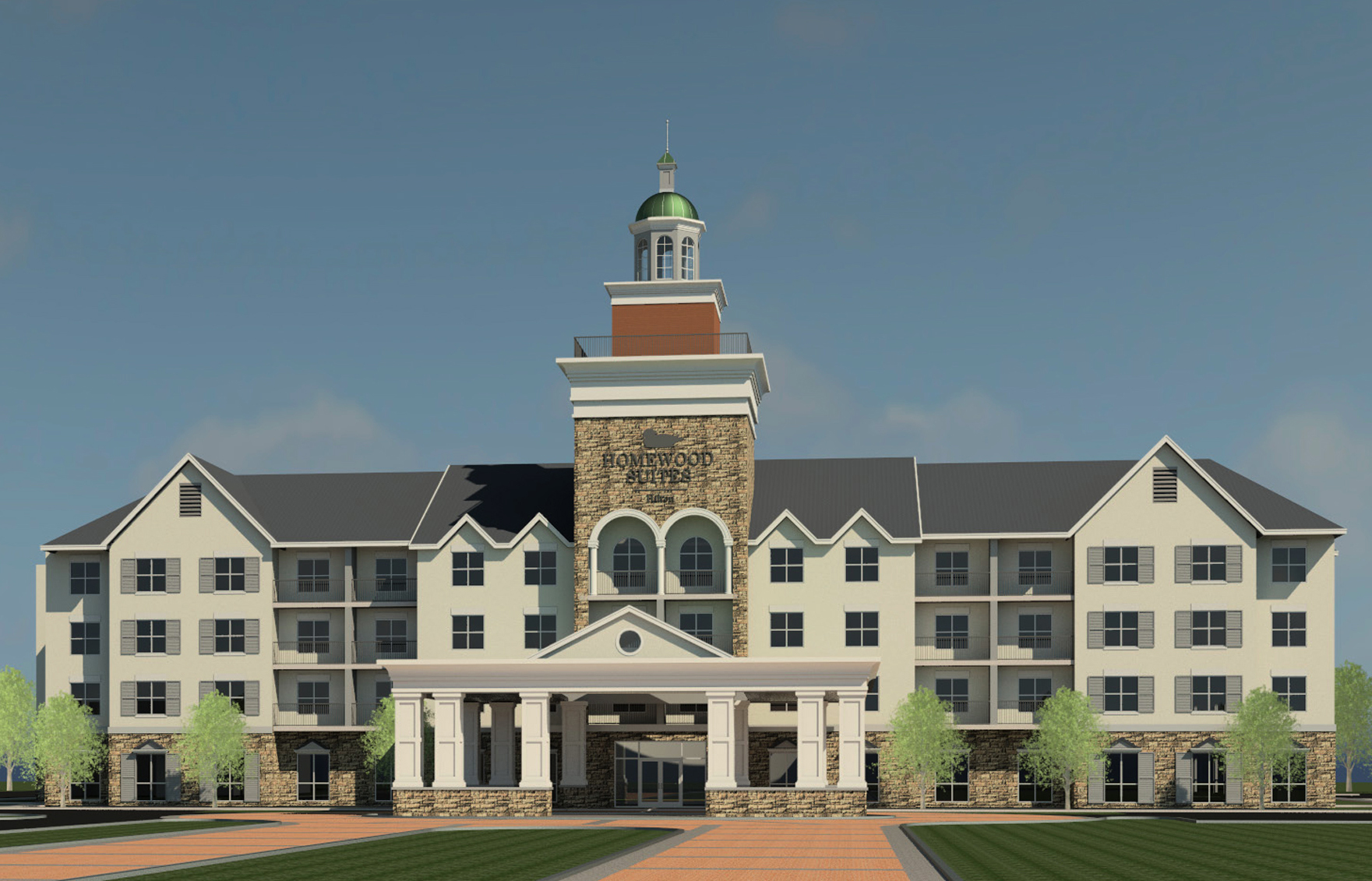 The architect’s rendering depicts what the new Homewood Suites would look like on Route 9, where 104 to 109 suites are planned for the four-story-high structure

“We’re at the stage of our lives where, when
we build a hotel, we build a great hotel,” said
Mike Hoffman, whose company, Turf Hotels,
is awaiting approval of a zoning change in
order to begin work on a Homewood Suites,
an extended-stay hotel on South Broadway in
Saratoga Springs.

Elevations and floor plans for the proposed
hotel were submitted to the Saratoga Springs
Planning Board and the Design Review Board
in early May, along with a request for a change
in zoning from medical/office/professional to a
tourism-related business district designation.

The land, previously the site of the Weathervane,
is on Route 9 (South Broadway) across
from the Saratoga State Park.
The project “will benefit Saratoga Springs,”
he said. “We will remove an eyesore and build
a beautiful hotel.”

If the zoning change is approved by the Saratoga Springs City Council, a decision which he expects in a couple of months, work would start immediately with a projected completion date of July 2015.

If the change is not approved, “We’ll have to find another site,” he said. “I’m a hotel guy … We like the location. It’s a great site,” he said. He termed Saratoga Springs “one of the great cities of America” but said the approach to the city from Northway Exit 13, the route most people take, is not very attractive. He envisions the new hotel as part of a necessary upgrade of that neighborhood.

Hoffman estimated the cost of the project at more than $10 million. The planned hotel would be four stories high and have between 104 and 109 suites. Suites will include some kitchen facilities: mainly a sink, a refrigerator and a cook top, but Hoffman does not expect many guests to use them. The hotel will provide a “full complementary breakfast” every morning and “heavy hors d’oeuvres” four evenings a week. Beyond that, he predicts, guests will eat in local restaurants most of the time.

The hotel is planned for extended-stay guests, anything from a few days to a few months. He sees it catering to visitors to Saratoga Race Course, employees new to the area, and vacationers.

“It can become a second home to a degree,” he explained. He said it is too soon to quote rates but he expects them to be comparable to those at the Hampton Inn and Suites on Lake Avenue in Saratoga Springs, that he also owns. Homewood Suites is a Hilton Hotels franchise. Hoffman’s company has a similar hotel on Wolf Road in Colonie.

When the hotel opens, it will have approximately 40 employees, Hoffman estimated. Close to twice that many people will be employed during construction.