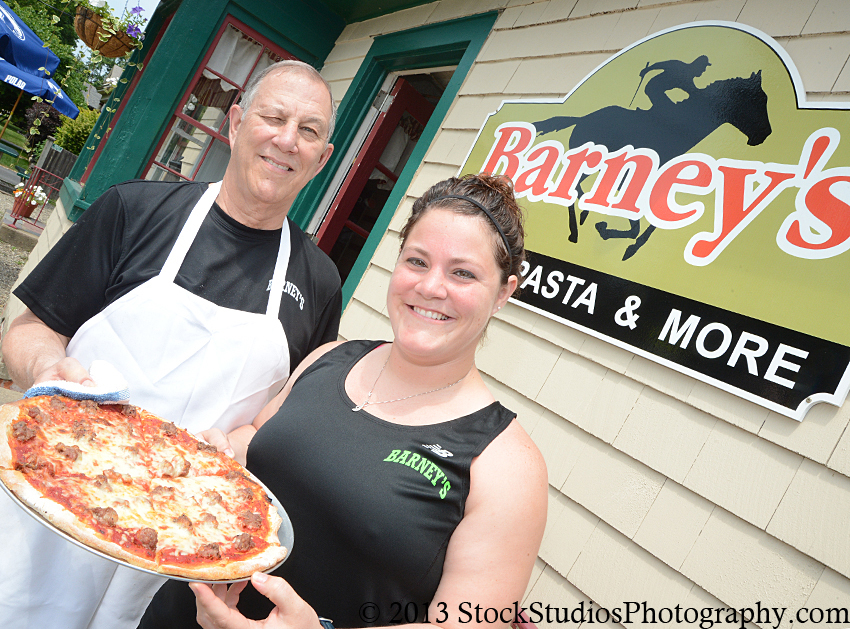 Barney Villa is back in the pizza business with Barney’s Pizza on Lake Ave, displaying one of his creations with daughter Tina Villa, who manages the business

With the same family recipes that have been
around since 1971, the Villa family, who are
famous in the Saratoga area for their pizza, recently
opened a new restaurant on Lake Avenue.
Barney’s Pizza opened in May at 223 Lake
Ave., across from East Side Recreation.

“We’re still the same family-oriented business
that everybody knows,” said Barney’s Pizza manager
Tina Villa. Tina’s father and grandfather
opened the first family restaurant in Saratoga
in 1971, which was called 2 Barney’s. Her father
also ran Barney’s Townhouse and made pizza
at the Gaslight Lounge, both former Saratoga
Springs establishments.

Since opening in May, she said business has
been “overwhelming, but flattering. We got
slammed the first two weeks.”

Most business has come from people who were previous customers at the other restaurants, Tina said. Barney’s Pizza is the only establishment the Villa family currently has in Saratoga Springs, but they also run Alpine Lake RV Resort in Corinth. This helps bring business to the restaurant too, she said.

She wanted to open a new eatery and put the bug in her dad’s ear about doing it. Certain specifications, however, were non-negotiable. “We didn’t want to make a huge investment in a big space,” she said. “It’s more manageable” in smaller quarters.

Barney’s Pizza is now open for lunch as well as dinner. Beside their well-known pizza, they also have subs, sandwiches, salads and “key Italian dinners,” she said.