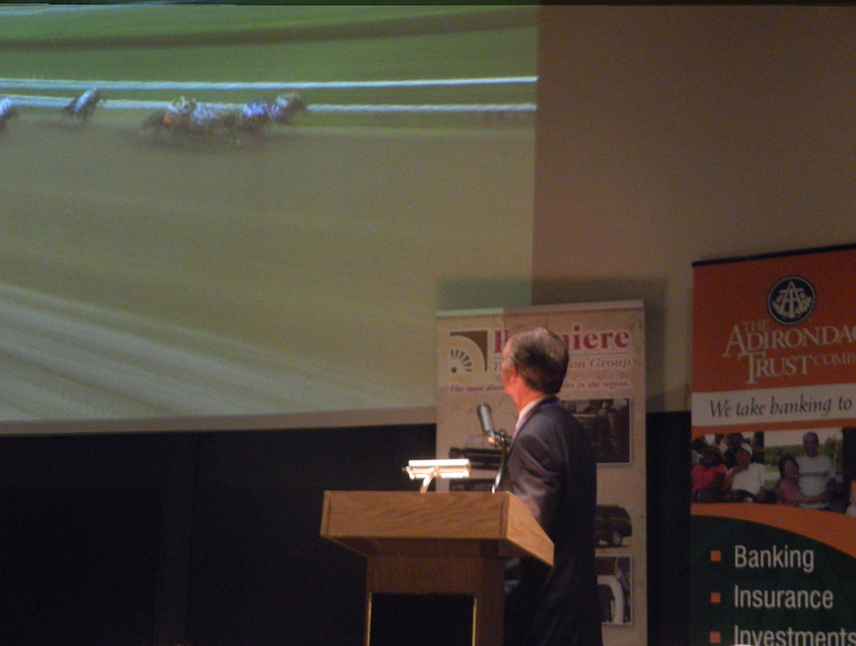 Charles Wait, chairman of the Saratoga
150 Committee organizing and overseeing
the activities celebrating the sesquicentennial
of horse racing in Saratoga, called new
NYRA President and CEO Christopher Kay
“the very best person to lead racing in New
York state” when introducing him to speak
last month at the National Museum of Horse
Racing and Hall of Fame.

Kay was addressing a group of local business people
at a Saratoga County Chamber
of Commerce and its those kind of expectations
he is taking on as he steps into the role
as leader of the group that has been beset
by controversy over the last decade or so.

“Never has there been as much opportunity”
in the state’s racing industry, Wait said, “on the other hand, we face challenges
… serious and daunting challenges.”

Among them, stabilizing and growing an aging fan base and competition from other forms of entertainment and gambling. Horse racing has been in decline, nationwide, though Saratoga has held itself significantly above national trends, industry officials say.

Early in the speech, Kay called Saratoga Race Course “one of the pre-eminent racing venues in the entire world,” and stated, “My goal is to protect and preserve this cherished placed.”

Kay, who is residing in Saratoga Springs this summer, cited the “tremendous passion” the fans have for the local track and the great investment the community has made over the years.

He spoke of the upcoming season which is the center of the massive Saratoga 150 celebration, noting that it has been written about in numerous major newspapers and national publications. Additionally, there will be races getting national television exposure on NBC, including the jewel of the race meet, the Travers on Aug. 25.

“We’re hoping for a blockbuster race this year with the winners of all three legs of the Triple Crown: Orb, Oxbow and Palace Malice,” Kay noted.

“National exposure is certainly a boon to the Saratoga brand,” he said.

The new president called the race track “a crucial economic driver” for thousands of people in the region and cited a 2010 report on its economic impact, commissioned then by the Saratoga County Industrial Development Agency.

He noted that 9 percent of agricultural parcels in Saratoga County were classified as horse farms in 2010, an increase from 6 percent in 2004, “and it could be even more now.” He added that NYRA pays $13.6 million in taxes each year, “so its it any wonder we all have a vested interest on the continuance of Saratoga Race Course.”

Kay also addressed some matters that don’t get the big headlines, specifically the improvement of conditions for workers on the backstretch–those that care for and exercise the horses and are an integral part of a racing team.

He said two dormitories have been renovated and more will be done “until we have improved the living conditions of every backstretch worker.”

He lauded track patrons Marylou Whitney and her husband John Hendrickson for “their unwavering commitment to improve conditions along the backstretch,” including helping many learn English, computer skills and other valuable skills.

He praised Backstretch Employee Service Team (BEST) for providing things like health care and services “crucial to the lives of those people.”

“My first impression of Chris is that he’s very approachable, a very fast learner, and someone who is already focused on the customer experience NYRA provides at all three of its race courses,” said Todd Shimkus, president and CEO of the Saratoga County Chamber of Commerce, afterward.

“His successful experience in business as a leader in many different organizations speaks for itself and those leadership skills will be essential in this new role too. I love the fact that he’s talking about being here for the long term, because we really need leadership stability to advance the interests of NYRA and our state’s thoroughbred horse racing industry at this critical juncture.”

Saratoga Race Course has enjoyed “a remarkable history and legacy, but the best is yet to come,” said Kay, adding: “Saratoga, more than anything else, is a place to be savored.” Kay has been attending events in the city ever since.