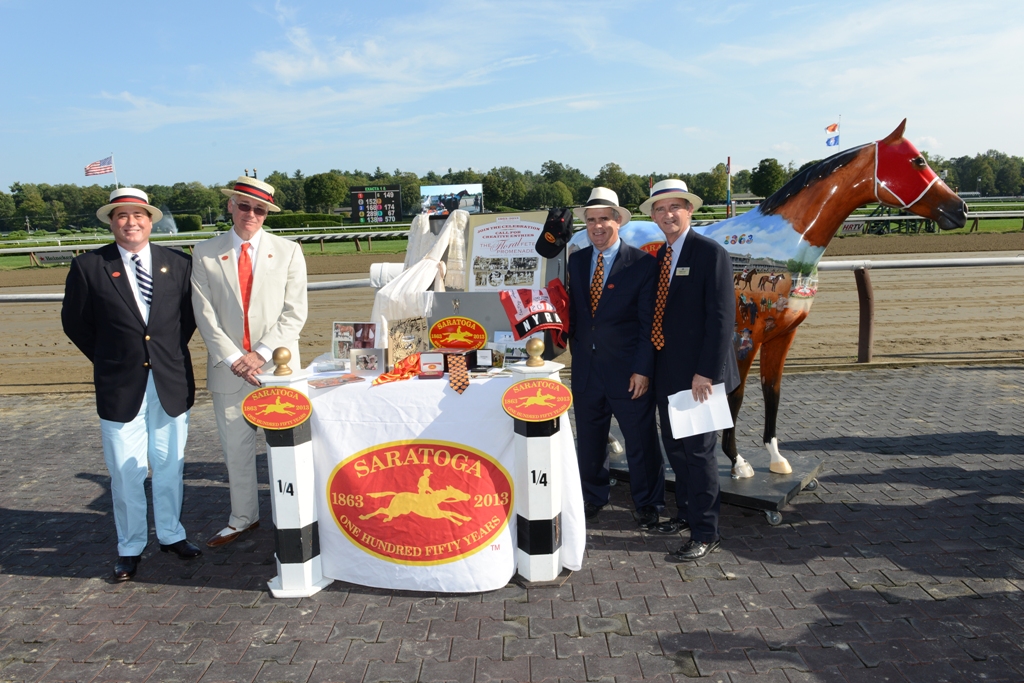 At a ceremony on the last weekend at Saratoga Race Course, NYRA CEO Chris Kay, right, and Saratoga 150 officials showcased items to be buried in a time capsule at the track

Statistically, the recently completed season
at Saratoga Race Track wasn’t a worldbeater
for the New York Racing Association
(NYRA), which operates the track. It was a
solid season on which new NYRA CEO Chris
Kay can build.

But local officials are pleased about the
throngs of people that regularly hit downtown
and its businesses during the track’s 150th
anniversary celebration, which garnered attention
far and wide, including coverage by
NBC sports on seven different dates.

“It was a great season,” said Joe Dalton,
a member of the Saratoga 150 Committee,
which put together the budget, created
the gala anniversary and organized 200-plus
activities from May through September. “Everybody’s
happy about it.”

Even with attendance down somewhat, Dalton said all indications are that more fans were pulled into downtown Saratoga throughout the season, whereas in some seasons, track-goers may have avoided downtown because of traffic and congestion.

All-sources handle–the amount of money wagered in the pari-mutuels during the season– includes wagers on Saratoga races both on-track and from simulcast outlets nationwide. On-track handle on Saratoga races totaled $147.5 million, down 2.1 percent from $150.7 million last year.

NYRA said handle figures dipped into negative territory as a result of the final two days of the meet, when wet conditions necessitated that eight scheduled turf races be moved to the main track, which led to several scratches and reduced field sizes in those races. But local officials are beaming over the residual effects.

“We definitely drew the folks in from outside the region,” said Todd Garafano, president of the Saratoga Convention and Tourism Bureau.

He said official figures on the economic impact aren’t ready, but in speaking to people at the city’s hotels, “July was great” with occupancy and rates high, “and August was much the same or better.”

“I think what the season showed is downtown Saratoga is becoming a destination in its own right,” aside from the racetrack and Saratoga Performing Arts Center, said Charles V. Wait, chairman of the Saratoga 150 Committee.

“All the merchants I talked to were up over last year. The bars and restaurants were very happy.”

“We saw a lot of first-timers this summer,” Wait said. “I expect they’ll be back, not just speaking of next summer, but in the fall and maybe the winter.”

Garafano noted conferences during the summer were strong and many corporate groups came to the area. Restaurant and shop owners also reported big business, even on the last weekend of the meet, which isn’t always the strongest in the wake of Travers weekend.

He said the marketing of the 150th anniversary of the track “was very effective. We got a lot of national and even international exposure from that. It greatly raised awareness, which was the point.”

He said the summer season is used to promote fall and winter events and there should be good spin-off from that. The fall convention season “looks very, very strong.”

A highlight, said Dalton, was the Floral Fete Promenade, the parade downtown sponsored by Marylou Whitney and her husband, John Hendrickson, that officials said drew an estimated 40,000 people to the Broadway area. “It was a super effort.”

“One of our primary missions was to counter some of the bad publicity that racing has had in the last five or six years and show that we provide a great family-friendly place with great racing,” Wait said. “I think we did that.”

“Our second goal was to bring the community together. People can get caught up in their own businesses, and sometimes there’s bickering about zoning issues or city charter issues or green space issues, but they all came together for the 150th celebration. The entire community was together,” he said, noting “it sets up nicely for the 50th anniversary of SPAC in 2016.”

Dalton said all of the work that went into every aspect of the 150 celebration is being put into detailed reports. Those reports are being stored so that when a 200th anniversary event is being planned in the future, organizers will have very thorough, exact, information that can be used as a blueprint.