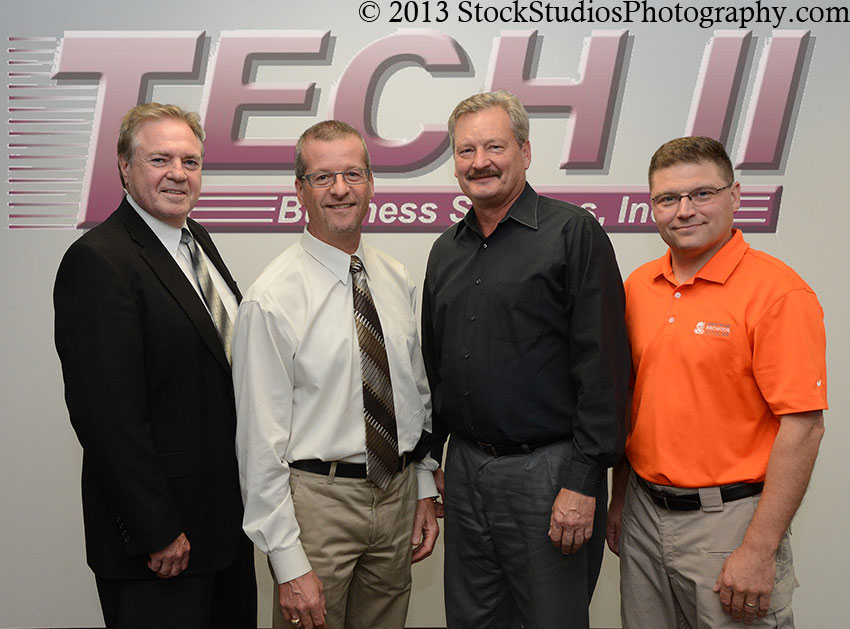 From left, Peter Farley, Eric Guby, Daniel Bardin and Douglas Gillson stand in the Wilton headquarters of Tech II Business Services, which has been in business for 30 years

There are now more than 30 employees,
nearly all of them engineers, and the company
is housed in its own building on Route 50 in
Wilton.

Company founder Eric Guby remains active
as president and CEO. He has been joined by
Dan Bardin, chief operating officer; Doug Gillson,
vice president for technology; and Peter
Farley, vice president for sales and marketing.
The 30th anniversary is “just a milestone
in business,” according to Farley, with no
particular celebration planned.

The company is a managed system provider, designing and installing computer systems and servicing them after they are up and running. Most of the service is done remotely, either from the company’s Wilton headquarters or, in some cases, from an employee’s home.

Gone are the days when a customer complaint prompted Tech II to send out a truck and service person to look at the problem, Farley noted. About 85 percent of the work is done remotely and the focus is on proactively monitoring clients’ networks, spotting problems before they become serious.

A growing part of the company is the provision of “cloud computing” services, which allow customers to store data off site. Despite the name, data entrusted to “the cloud” is stored in very earthbound data centers. Tech II is in the process of opening its second such center. Still, Farley said, “cloud computing is just going to hit the sky.”

Video surveillance systems are another area where Farley sees continuing growth. The systems allow small to medium-sized companies to monitor their people and assets. Tech II uses video surveillance technology to keep an eye on its own data centers as well, and those are also managed remotely.

The company began life in a basement on Madison Street in Saratoga Springs. Then, they moved to a facility on Saratoga Lake, where they remained for eight years. Thirteen years ago, Tech II acquired Power Solutions, a Glens Falls company, and, at about the same time, purchased and moved to its current Wilton facility on Route 50.

The video surveillance business was added about 18 months ago. For now, Farley said, the company’s current space is adequate, largely because changes in technology have reduced the need for physical space. They no longer have to store service trucks, for example.

Farley termed the company a “value-added reseller,” that is, a company that designs and installs systems using components manufactured by other companies. They do not manufacture equipment.

Tech II has clients throughout the Capital Region and, as local companies expand overseas, some international clients as well. The client list includes major banks and health care systems as well as smaller companies.

Security is a major concern for a company with constant access to clients’ computer systems. Farley emphasized that Tech II restricts its employees’ access to clients’ operating environments and does not access critical data files, such as medical records or financial data.

In addition, “we have proper security within our company,” including background checks and fingerprint checks for new hires, Farley said. He said the company has been “stress tested” for security measures and received SSAE -16 certification, a stringent international standard.

As the company has grown, so has its work force.

“This is a fairly high industry for turnover,” Farley said, but noted that there are people who have been with the company 20 years or more. Finding new hires is “always a challenge,” he said, “You have to hire the right people.”