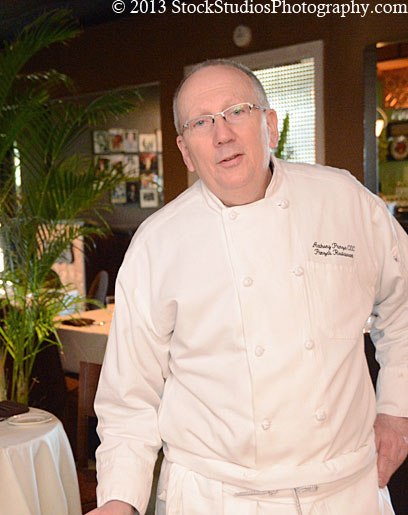 Located at the southern end of the lake,
Panza’s continues to welcome Saratogians and
visitors who have flocked here for traditional,
home-cooked Italian cuisine since 1938.

Settling in Mechanicville in 1897, the young couple, who spoke no English, opened a bakery, and introduced curious upstate New Yorkers to Neapolitan cuisine, such as oven-baked pizza -a distinct novelty at the time– and family staples from the old country.

In 1938 Ma Panza branched out and moved the business to its current location on Saratoga Lake, bestowing it with a name typical of the era, The Starlight Room. Thirty-five years later in 1973, great-grandson Tony Panza took over the reins. With a culinary school education under his belt, he still insists “the best training in the world” came as a young child, from studiously watching and continually being put to work in the kitchen by his grandmother, aunt, father and grandfather.

With a staff of around 30 full-time employees, and a cadre of permanent, part-time employees who focus on banquets and catering, Panza family members still clock in when needed. Tony’s nephew, Richard, is currently on staff and son Alex, who will soon graduate with a masters degree in education, assists during the summer.

Tony’s wife Jill, a successful internist with her own practice in Albany, trades the stethoscope now and again for piping hot plates, and brother Michael, busy with his own successful eventdecorating and entertainment company, Fine Affairs, also finds time to pitch in.

Panza’s ballroom accommodates parties or meetings for up to 250, and weddings have come to represent about fifty percent of their business, these days. They offer full event planning and banquet and catering services, and there’s plenty of room for festivities to take place indoors or outside overlooking the lake.

Panza notes that generations of families return to host wedding celebrations at the restaurant. “I’m hosting weddings for kids whose parents held their receptions here, and my parents were hosting their parent’s wedding receptions.”

Panza downplays some of the ways in which he gives back to the community. When his own mother suffered a stroke and caring for her became too much for his father, she was cared for by The Wesley Community in Saratoga.

Tony’s father would visit his wife every, single day to bring her lunch, and would take it upon himself to bring food in for the caregivers, too. “He became a fixture there,” Panza said. “They were so good to her, and so compassionate, I try to do a little event for them every year, to bring them a little attention.”

Panza’s menu changes about twice a year, and features many perennial favorites such as clams casino, rigatoni and meatballs, ciopinno –an Italian seafood stew, greens and beans or chicken Marsala. But there’s room for creativity and suggestions from the patrons.

“I’m always here – always in the kitchen. This isn’t some big corporation with a head office on the other side of the country. I know what my guests eat, I know what they like. If someone asks me to get some wild boar for Friday, or can they come in on Tuesday and get their favorite, like osso bucco, I can do it. I can react quickly – and people like that.”

In addition to the restaurant, Panza oversees the catering at Ballston Spa Country Club, and provides food services for Beechnut Corp. headquarters, and Amsterdam Printing in Montgomery County, with cafeterias serving three to four hundred diners at each location, every weekday.

Panza’s Restaurant is located at the southern end of Saratoga Lake, at 510 Route 9P, Saratoga Springs. They can be reached at 584-6882, www.panzasrestaurant.com and on Facebook.