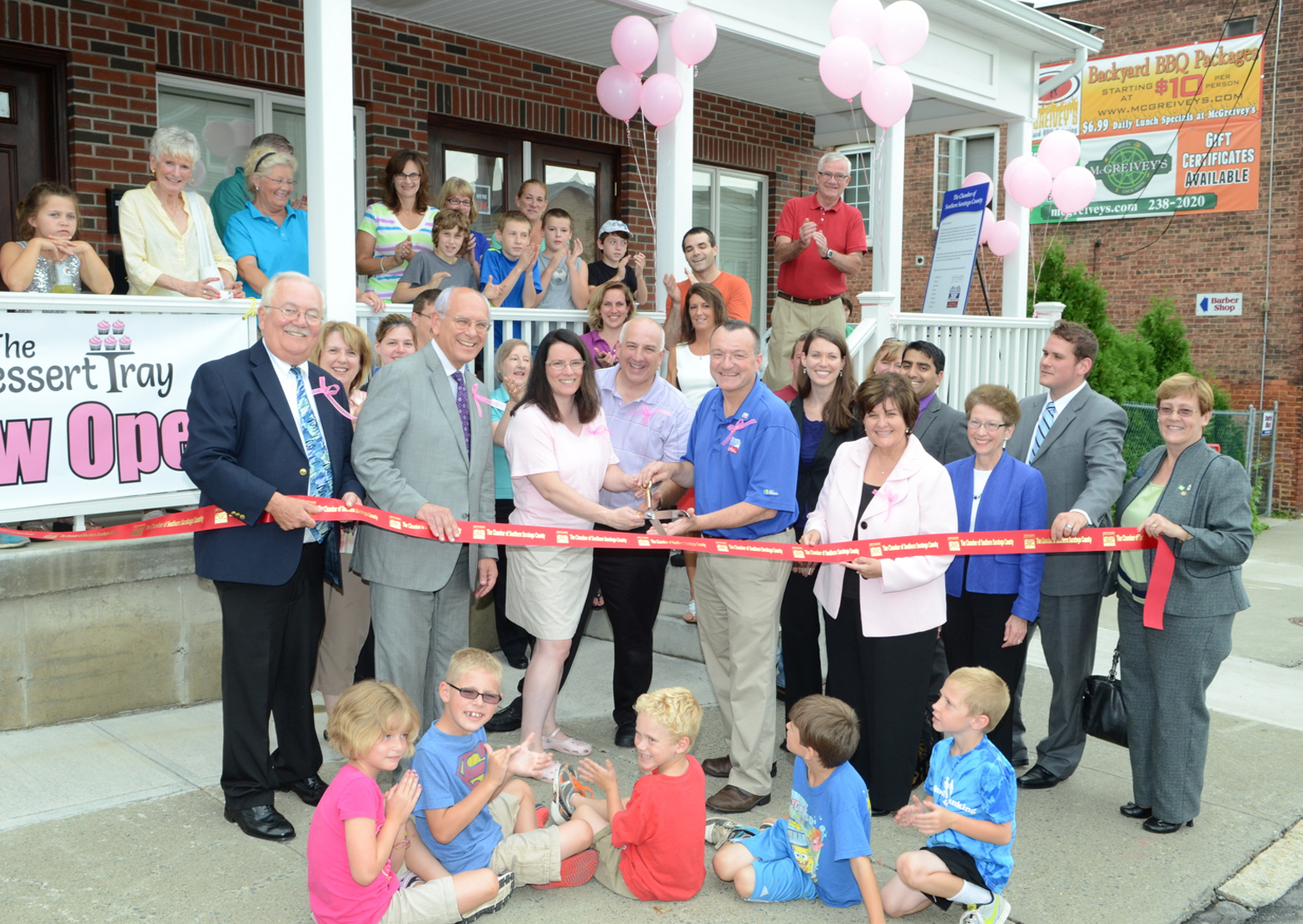 Tracy and Bob Zordan, in the center with Chamber of Southern Saratoga County President Pete Bardunias, cut the ribbon for the opening of their business, Dessert Tray

For the past several years, Waterford has
been void of a bakery, but Tracy Zordan, kindergarten
teacher by day and baker by night,
changed that when she opened The Dessert
Tray at 103 Broad Street this summer.

What began as a hobby for Zordan, who loves
to bake cookies, brownies, cakes and cupcakes,
is now a busy dessert business featuring specialty
cakes like tunnel of fudge, pumpkin
torte, raspberry infused torte and over a dozen
types of cookies and brownies, including her
signature chocolate chip and butter cream
“cookie cups.”

She and her husband, Rick, bought at 72- foot lot in town, then hired an architect to design an 11,000-square-foot building with two street-level storefronts, a lower-level youth boxing club gym and two apartments on the second floor.

“I always have loved baking,” she said. “It started with friends asking me to bake for parties a few years ago … Now, here I am,” in business in Waterford.

The Dessert Tray, accented with pink decor, is quickly becoming the place to be in Waterford, particularly after church services as Zordan features Sunday scones, coffee and tea. There are four tables in the shop with room to expand. She said she is a “pink fanatic” and learned that pink, a staple color for many old fashioned ice cream shops, supposedly makes people crave sweets.

“So why not go pink?” she quipped. The Dessert Tray offers “wedding buffets” that feature three varieties of elegantly decorated cupcakes and six choices of delectable cookies.

“I love to bake and set up for weddings,” Zordan said, “and, a dessert buffet is a nice change from a traditional wedding cake.” Now the bakery is gearing up for the holidays. She knows it will be a busy time and a good opportunity to put her baking schedule to the test.

Zordan said she’s been collecting recipes over several years, some are family favorites, but others are her own discoveries. Pumpkin brownies and tortes, a three-layer mousse cake, strawberry cheesecake cupcakes and dozens of cookies were on the baking list last week. “I had several orders for cookie trays,” she said. “It was a very busy weekend.”

About 150 people attended The Dessert Tray’s ribbon cutting in mid-August, along with members of the Chamber of Southern Saratoga County.

“I am a lifer in Waterford,” she said. “Everyone here knows me. It was a fun day … One customer told me ‘The Dessert Tray was just what we needed because we didn’t have a local bakery anywhere,’ and the one in Cohoes burned down. It’s great to know people are already enjoying the place.”