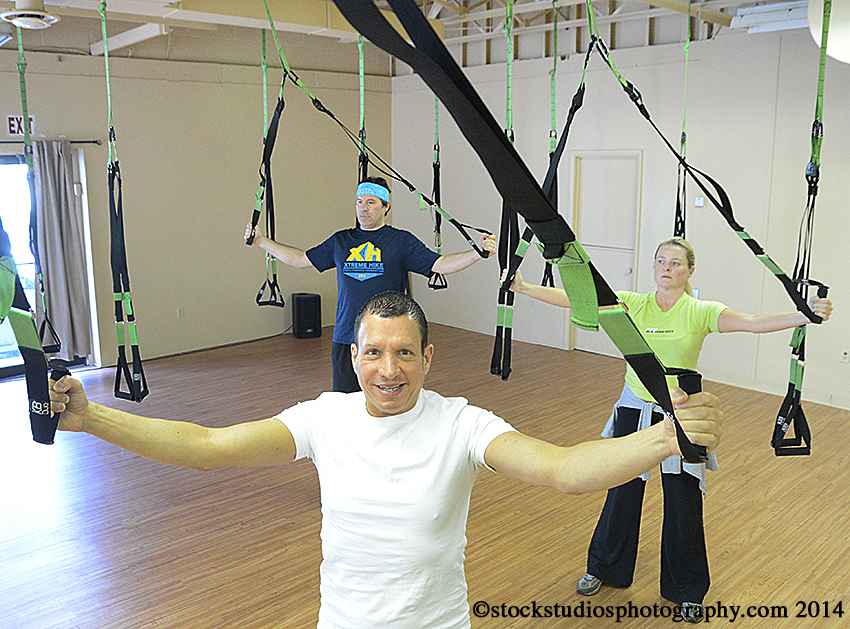 Steve Chindamo, foreground, owner of Suspension Training Center of Saratoga, demonstrates the use of suspension straps, which are the basis of the workout regimen there.

Suspension Training Center of Saratoga, a new fitness center that uses suspension straps hung from the ceiling as the basis of its regimen, opened recently at 61 Caroline St. in Saratoga Springs, at the corner of Henry Street.

Owner/operator Steve Chindamo came to Saratoga from New York City, where he was a high school English teacher and coach. He said that when he went to check out the gym at the Saratoga YMCA, he found that there was equipment called suspension straps hung from the ceiling but they weren’t being used much. He went online and researched how to use the straps, which leverage gravity and body weight to produce resistance.

He eventually became certified as a suspension trainer.

Chindamo said business is picking up gradually. Classes, offered at 6 a.m., 10 a.m., noon and 6:30 p.m., currently run with seven or eight people in a space set up to accommodate as many as 25.

His clients to cover a wide age range, from boys from high school teams to middle-age moms, on up to one 85-year -old. The youngest client is 10.

Cathy McNutt and David Wolfe are the other two trainers at Saratoga Suspension Training.

Chindamo said he went into a training business because he likes to make people feel good about themselves. He feels that suspension training is a thing that anyone can do. Intensity of a workout can be increased or eased up by moving one’s body forward or backward. Suspension training is good for strengthening the midsection, Chindamo noted. Core muscles are being worked even when the emphasis is on other muscle groups.

The owner said he has received comments from clients saying that they can’t believe how much they’ve toned up, lost weight, and increased muscle in a relatively short time. Classes are $10 for a single class or people can pay $80 for unlimited classes in a month. The first class is free.

The website address is suspensiontrainingcenter.com. The phone number is 681-0544.