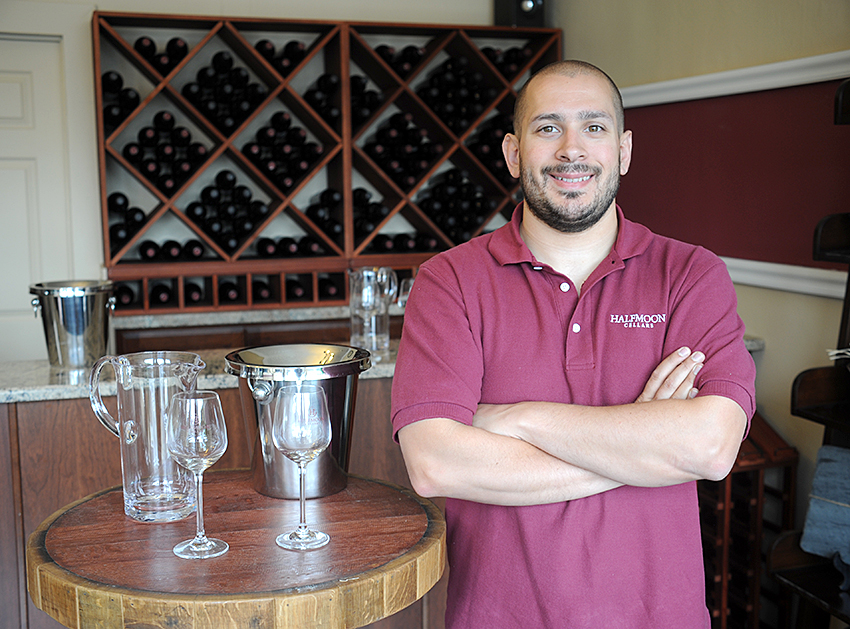 John Reyes, one of the owners of Halfmoon Cellars winery, stands in the company’s new tasting room on Caroline Street in Saratoga Springs

The winery already operates in Halfmoon,
the namesake of the company. The owners,
Alison Bauder and John Reyes, are excited
for the opportunity to expand into to
Saratoga Springs.

“We’re from this area and we love the atmosphere
of Saratoga” said Reyes. “They’ve
done a great job of expanding the city. I
think we’ll have a lot of walk-in traffic, a lot
of people who are going to be interested in
coming to do a wine tasting before heading
off to the track.”

Halfmoon Cellars, at 24 Caroline St., will
join the lively restaurant and bar scene in
Saratoga.

Reyes is an IT professional living in
Halfmoon. He works with several companies
including Host Rocket, a web hosting
company, and ViaTalk, a VOIP provider.
The Albany Business Review named him
one of the area’s “40 Under Forty” business
people.

Reyes and his CFO, Bauder, started
winemaking as a hobby. After a few years,
they decided to take their success with
their IT businesses and use it to launch an
area winery.

The winery receives grapes from the
Suisan Valley in California, produced by a
family that has been in the wine business
for almost 100 years. Reyes and Bauder
make trips to California to see how their
grapes are produced. The grapes then make
their way to Albany, where they are made
into wine.

Halfmoon Cellars produced its first vintage
in 2012, a chardonnay. Light gold in
color, the chardonnay has complex aromas
of ripe apple, pear and citrus, with hints of
vanilla and nutmeg.

The winery will be introducing several
more wines to their lineup this year including
a cabernet sauvignon, a merlot, another
chardonnay and a reisling.

The company hopes to add New York
sourced grapes to their production in the
future.

The Caroline Street location will feature
a tasting room, where people can sample
wines. Customers will be able to purchase
bottles. A variety of specially paired items
such as cheese and crackers will be available
as well.

“We’ll have things like wine and cheese
paired together if people just want to purchase
them and take them over to the park
for a picnic” said Reyes.

With track season getting ready to
begin, Reyes and Bauder are excited for a
successful start to their business. For
more information, visit the website at
www.halfmooncellars.com.