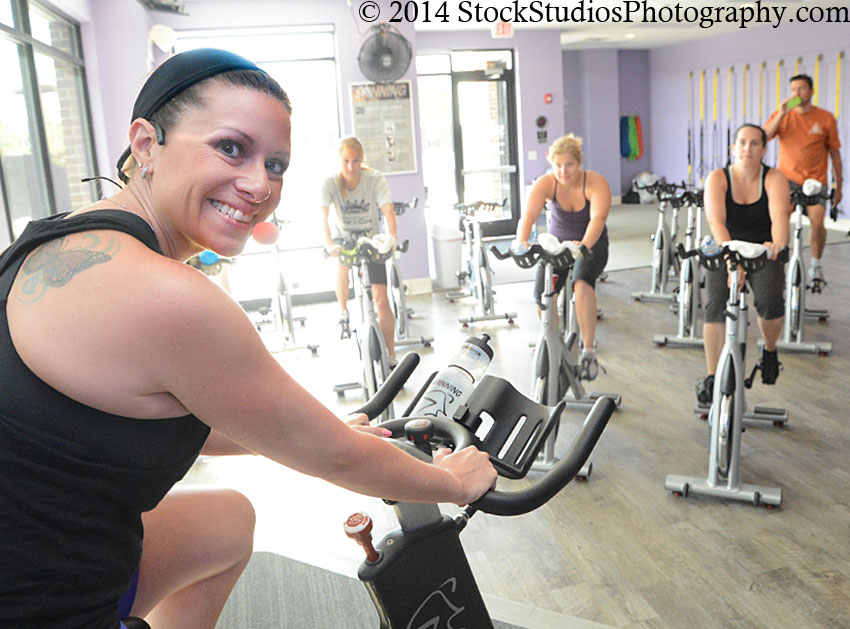 Angela Amedio runs Saratoga Cycling Studio in the Washington Building at 422 Broadway in Saratoga Springs. She says spin classes are growing in popularity

Area residents looking to get in shape have a
new option in Saratoga Springs. The Saratoga
Cycling Studio opened an expanded facility at
422 Broadway.
The studio offers an indoor cycling program
that can be tailored to the individual rider’s
needs.

“(Spinning) is the highest quality cycling
experience you can get in Saratoga,” said
Angela Amedio, the studio’s founder. “We offer
individualized bike setup and have custom
class rides for specific purposes, whether it’s
strength, endurance or just for fun.”

Amedio said the bikes used for spinning, a
program created and licensed by Mad Dogg Athletics,
are designed to emulate outdoor riding.

Resistance levels can be adjusted on the bike
to simulate an uphill climb or a downhill ride.
She said the bikes can by enjoyed by riders
of any athletic ability.

“My instructors will get (the rider) set up
on the bike and will explain what we do. Our
motto is ‘It’s your ride.’ You can go at your own
intensity, depending on what your fitness level
and goals are,” she said.

Because spinning is a low-impact workout,
Amedio said the exercise is perfect for those
people who have been under the care of a
physical therapist or chiropractor. Spinning is
also a great exercise for retired runners who
have injuries which prevent them from getting
back on the road.

Saratoga Cycling Studio moved into its new
home at The Washington in June. The new
facility sports 25 Spinning bikes and the staff
has doubled with the move, says Amedio. The
studio’s spinning instructors are required to
attend a nine-hour workshop and must undergo
continuing education after that. Amedio, the
studio’s owner, is one of only 143 Spinning
Master Instructors in the world.

Besides Spinning, the studio offers fitness
options like yoga and TRX Suspension Training.
Amedio explains that the pairing of spinning
and yoga is like “a yin and yang. When you’re
on a spinning bike, it can be a high-intensity
workout. You’re in a sitting position and are
scrunched up. Yoga complements that because
it opens everything up. We start on the spinning
bikes and then transition down to the mats for
the yoga.”

Busy folks looking to get some exercise into
their hectic schedule can go to the studio’s
website to make an online reservation for a
spinning bike. Amedio said that, weather permitting,
studio attendees will be able to ride a
spinning bike on the rooftop of The Washington,
with views overlooking Broadway.

According to Amedio, the new facility has
proven to be a hit with the community. Attendance
has increased close to 30 percent
since it opened in June. She said the studio has
gotten a lot of foot traffic from people walking
up Broadway who were curious as to what’s
going on inside.

Amedio encourages everyone to stop in.
“If you want to lose weight, train, or just stay
healthy and fit, the Saratoga Cycling Studio is
the place to do it with a great sense of community
and camaraderie.”