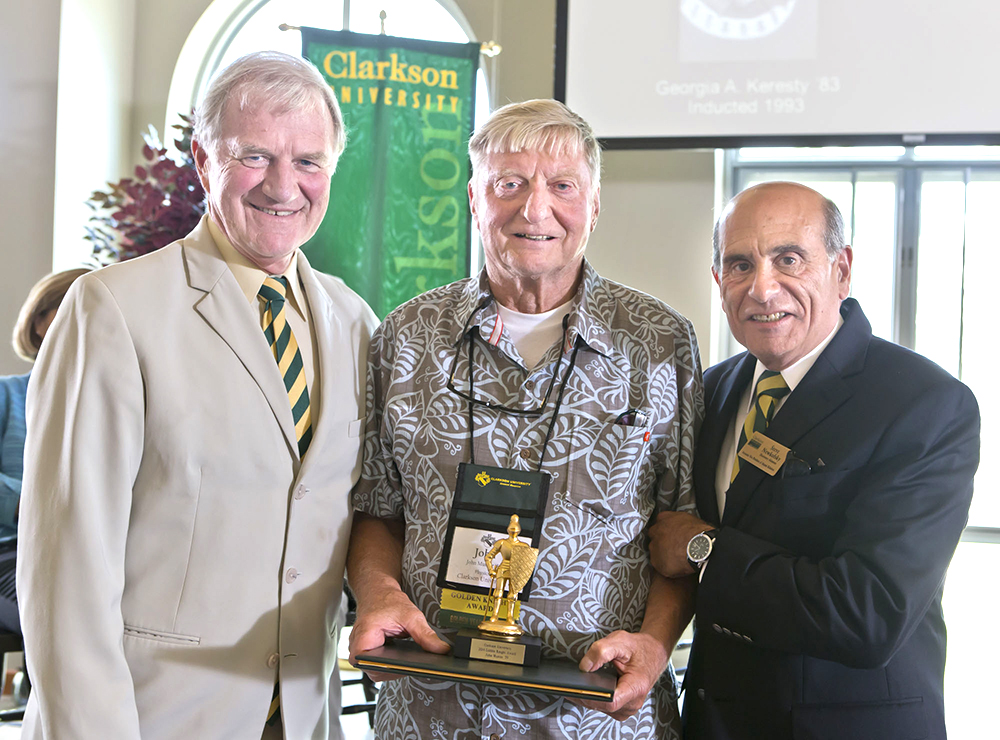 John Munter of Middle Grove was honored
recently with the Golden Knight Award by his
alma mater, Clarkson University.

Presented each year during Reunion
Weekend, Clarkson’s most prestigious alumni
award is given to alumni who have distinguished
themselves either by service to
Clarkson through Alumni Association activities
or have demonstrated outstanding
career achievement, bringing distinction to
themselves and to Clarkson.

Munter received his bachelor of science
degree in physics from Clarkson in 1962. He
earned a master’s degree in management from
RPI in 1967. He began his career with General
Electric in 1959. He was a test engineer for
the rocket engine design testing program for
Malta Test Division in Malta. He continued to
work in various engineering and management
positions at GE for the next 13 years.
In 1972, he left GE to form Munter Enterprises,
a general contracting construction
operation.

Over four decades later, the business
continues under the leadership of Munter’s two sons, John E. and Mike, both with civil
engineering degrees.

Munter has supported Clarkson in several
areas. He is a Roundtable member of the
Clarkson Fund. In the fall of 2012, Clarkson
celebrated the dedication of the Munter
Trails, which provide the campus and local
community with spectacular views of Fall
Island and convenient access to the Raquette
River, while enhancing an overall sense of
connection with the river. He played a critical
role in this project, as he spent countless
hours working on the trails with equipment
loaned by Munter Enterprises, according to
college officials.

Munter has served on the board of directors
at Wesley Health Care Center as the chairman
of building and grounds for almost a decade.

He currently serves as vice chairman at
Saratoga PLAN, which works to preserve farm
land and open space throughout Saratoga
County for recreational use. He is also a
member of the Saratoga Builders Association
and served four years as the organization’s
vice president.