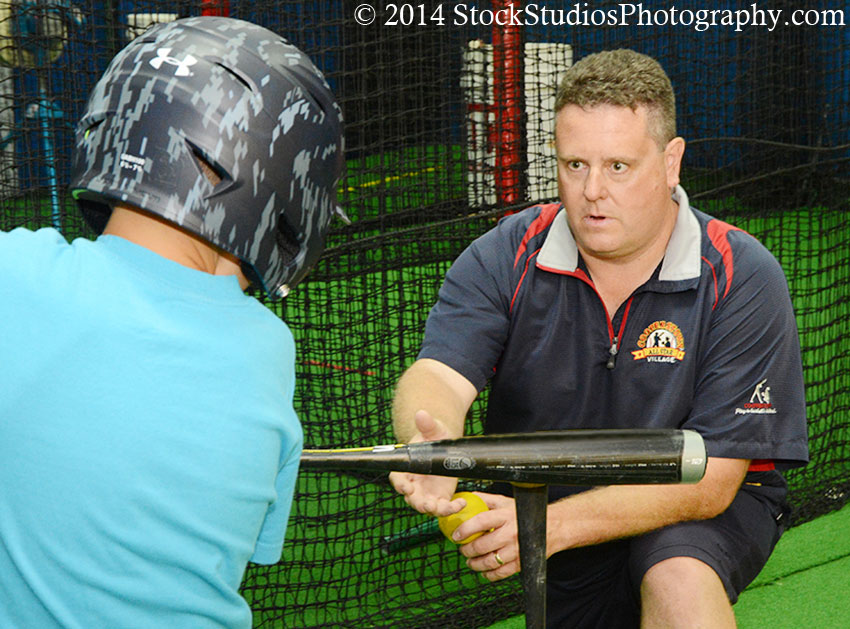 Bret McArthur, owner of Sluggers Den, works with a youngster on his hitting

While summer nears its end, baseball and
softball players don’t have to wait until spring to
resume polishing their diamond skills.

Sluggers Den, located in the Price Chopper
Plaza at 175 Ballston Ave. in Saratoga Springs, is
an indoor facility featuring three batting tunnels,
pitching mounds and instruction in “America’s
pastime” from owner Bret McArthur and his staff.

McArthur, who’s been involved with local
youth baseball programs for a number of years,
said he’s been pleased with the response from
the public. “It’s been outstanding. I couldn’t be
happier with our growth. Baseball has a strong
base in Saratoga.”

A popular offering at Sluggers Den is the
After-School All-Stars, where students can
learn the finer points of the game. McArthur
said 30 students are coming in once a week for
the program.

“We have six kids a day that come into the
Den,” said McArthur. “We give them a snack and
drink. Then, we do an hour-and-15-minute workout
with them. We work on throwing mechanics,
pitching mechanics, hitting and fielding. The
program has been very well-received by the
parents as the kids who’ve been involved had
outstanding years in their Little League and Cal
Ripken League seasons. I’ve added a fifth day to
the program and we now have some Ballston Spa
kids coming in.”

McArthur said another developing course is
the 90 MPH Club, where students are instructed
in the art of pitching, including the mechanics
of throwing and arm strengthening.

Sluggers Den also features a program called
“Power Yoga for Baseball.” As McArthur explains,
stretching is crucial for young athletes when they
reach their teens. “With baseball, having control
and flexibility is important,” he says. Yoga is now
being taught to baseball players at the collegiate
and professional levels and McArthur is hoping
to introduce the concept to Saratoga High School
players in the coming year.

According to McArthur, Sluggers Den has also proven popular with girls’ softball teams.
“Softball is huge with the girls,” he said. During
Travers Week, the Den hosted a summer
camp that was attended by over 80 children,
including an entire girls’ softball team from
Ballston Spa.

The Den is a destination for birthday parties.
McArthur sayid while most of the parties
are baseball-themed, the event can be tailored
to the child’s interests. One party option is the
always-popular “bounce house.”
As for the parties, McArthur said, “We take
care of everything. Parents don’t have to clean
up or set up the party. Our party coaches do the
work and the parents can relax.”

“I’m passionate about seeing baseball and
softball grow. It’s a great sport and teaches so
many life lessons,” he said.

Sluggers Den is open Tuesday through Friday
from noon to 8 p.m., Saturday and Sunday from
10 a.m. to 6 p.m. and closed on Mondays. Offhours
use of the facility is available by appointment
by calling 772-4487. For more information
about the facility, go to www.sluggersden.com or
find them on Facebook.