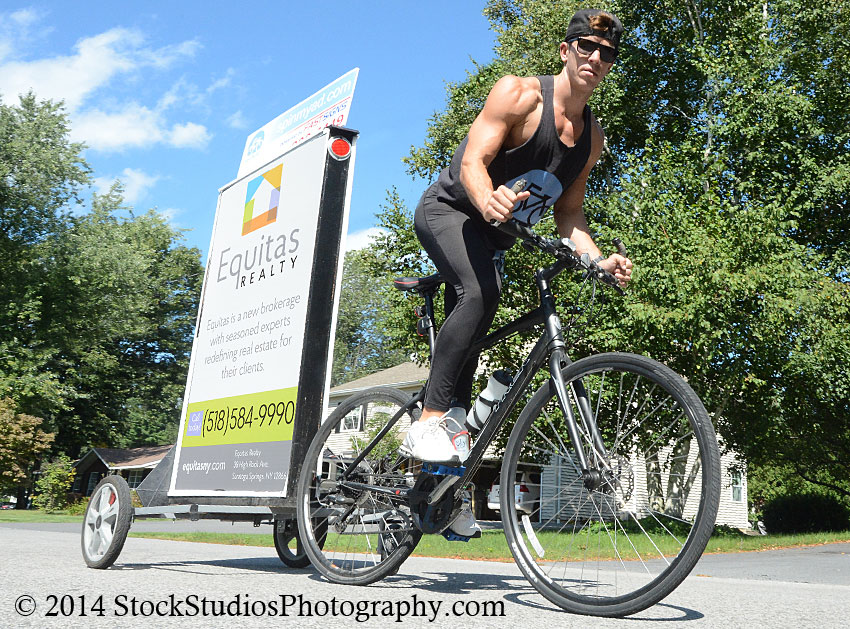 Kenny Goodwin Jr. tows ads around town via bicycle in his Spin My Ad business.

After graduating from the University of
Tampa with a degree in marketing, Kenny
Goodwin Jr. was commuting daily on his bicycle
to his job in New York City from Long Island.

He saw ads for Nike, jewelry businesses,
and other companies being pulled around by
other bicycles. He admired the environmentally
sound advertising platform and appreciated
the way that people noticed and responded
to the ads.

It wasn’t like an ad in a newspaper or magazine,
where a reader might skip a page and not
see the ad. It wasn’t like a billboard that people
would only see if they happened to be traveling
a particular stretch of roadway.

Advertisers
could request that their ad be transported in a
particular area at times of the day where their
target customers would be most likely to see it.

Goodwin moved to Saratoga four years
ago, and the idea for an advertising business
employing a bicycle platform persisted. So
Goodwin and his grandfather, Bob Eckardt,
designed and built it from the ground up.

Goodwin said it is important that, while he
and his staff are pulling a trailer with advertising
for a particular client, they serve as an
extension of that client. Goodwin makes certain
that Spin My Ad ambassadors are personable
and knowledgeable about the products and/or
services being advertised so that when a bike
stops in the park, at the track, on Broadway,
or any other area requested by an advertiser,
people ask questions and ambassadors can
offer information.

Optionally, an advertiser can have Spin My
Ad distribute cards or brochures so that potential
customers can learn more and have hard
copy contact information readily available.

Goodwin opted for print signs rather than
LED display ads. Each bike trailer can carry
three signs at a time. The trailers are designed
so that swapping signs in and out is easy. Sign
display schedules are generally sold in hour
increments. Some customers have wanted two
hours at a time, some have wanted 10. Some
ad campaigns are longer than others, with
some customers requesting a whole month of
scheduled ads.

Fast Signs, a Saratoga business, provides
the signs that the bike trailers carry.

When Spin My Ad was starting, many people
advised Goodwin to limit himself initially
to local advertisers as customers, he said.
But the goal of local advertising or national
advertising is the same, and national entities
have seen the attention that Spin My Ad’s
mobile advertising platform generates. Thus,
Goodwin’s company, while it does provide ad
services for local dentists, fitness services, and stores, has also carried signs for Elise
Stefanik’s political campaign, for high-end real
estate company, Equitas, for the Albany Times
Union, Live Nation, and Nestle’s, among others.

Spin My Ad tweets images on Twitter every
time a bike goes out with an advertiser’s
sign. Thus, says Goodwin, advertising for that
company occurs “on social media and on the
ground at the same time.”

Goodwin said he made a point of talking to
proprietors of every business on Broadway to
let them know what his business was going to
be, to assure them that bikes would not become
a nuisance to their business, and to find out any
accommodations those business owners might
want Spin My Ad to make for them.

Goodwin requests of advertisers that, in
order to obtain optimal effectiveness for their
ads, they allow Spin My Ads discretion to decide
whether to run ads on original schedule
under less-than-ideal weather conditions. Ads
delayed are run later under improved weather
conditions.

Spin My Ad has advertising contracts
through November. He does have other plans
for winter advertising campaigns.
Taxi My Ad will be a New York-inspired ad
campaign in cooperation with a local transportation
company to place ads on taxis on
magnetic signs and on bumper and window
wraps, he said.

In earlier stages of planning is a project
called Wrap My Ad. Goodwin is hoping to sell ads
on a network of businesses’ trash and recycling
cans in front of their respective businesses.
A business could advertise on its own receptacle
and in other locations in the network or
another business could advertise there, making
use of their participation in the network. Goodwin
said in such scenarios, he would be certain
that the ad on any business’s own bin would not
be that of a competitor in the same business.