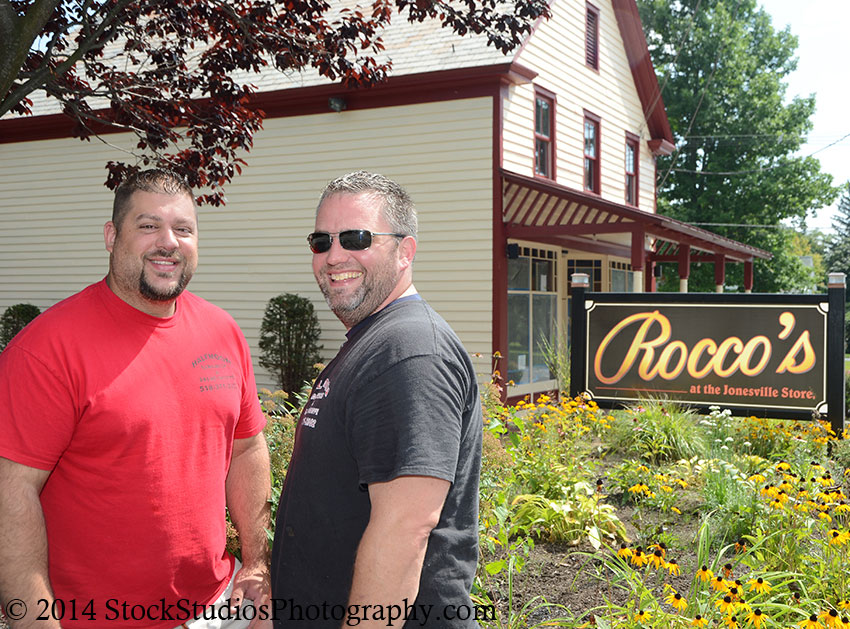 Sean Lee, right, the owner of Rocco’s, poses with Michael Kramer outside the new dining establishment that will be open for dinners only, except for a Sunday brunch

Sean Lee, proprietor for seven years of
Halfmoon Sandwich and Salad Shop on
Route 9, has lived in the vicinity of the former
Jonesville General Store for most of that time.

He heard stories about the location having
been a pizzeria and video rental store. With a
building constructed in 1853, he’s even heard
stories from locals who used to go to the location
with their wagons to buy hay pitched
down from its hayloft.

Lee had an idea, however, that the location
at 989 Main St. in Jonesville would make a
great neighborhood restaurant. Lee said the
building had “lots of character and lots of
history,” and bought it with the idea of creating
a community dining venue offering “good
flavor, good food, and good drinks” and “really
good service.”

He expected an early September opening
for Rocco’s at the Jonesville Store.
Most of the renovations on the site have
been cosmetic. Oak wainscoting was applied
to the walls, with wallpaper on the
upper walls to retain an 1800’s feel. The bar
installed is oak as well. The wooden floors
were refinished.

The restaurant will offer primarily American
fare, with steaks, chops, fish, and rack
of lamb, along with pasta dishes. Homemade
meatballs will be made with ricotta to keep
them really moist. There will be a mozzarella
encarozza appetizer that features mozzarella
sticks wrapped in bread, dipped in bread
crumbs and deep fried, served with tomato
sauce.

Lee’s mother’s cheesecake recipe made
the dessert menu, and he promises this is
a wonderfully smooth confection. Lee will
be offering a wine selection that includes
“30 bottles under $30″ so that, he says, a
middle-of-the-week dinner out doesn’t stretch
household budgets too extensively.”

Seating capacity will be 50, for dinner
only, open 4-9 or 10 p.m. with the exception
of a Sunday brunch. Sundays, the restaurant
will be open 11 a.m. to 9 p.m. Rocco’s will be
closed Mondays. Orders can be called in for
meals to go. The phone number is 406-5251.
A website is under construction.