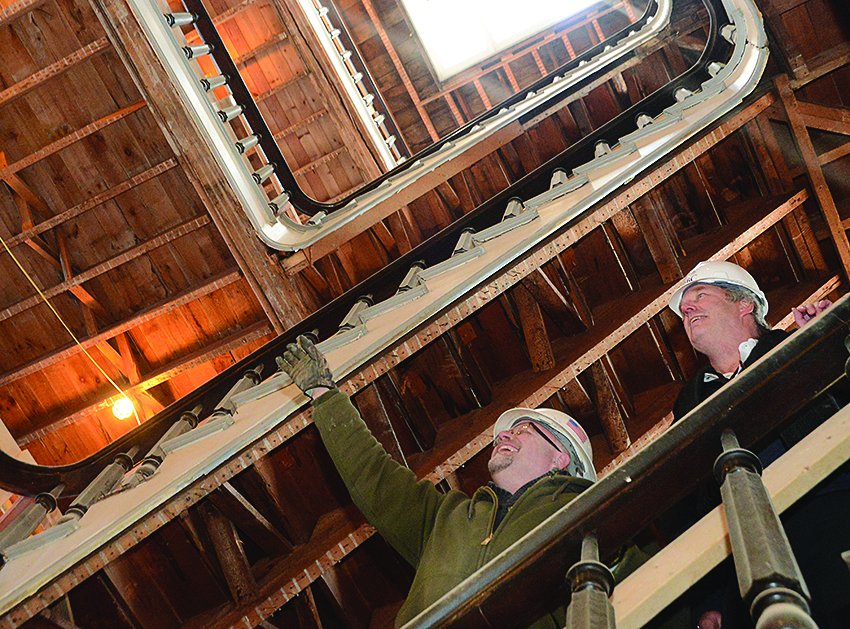 Joe Salzer of BCI Construction, left. and Jeff Ward of RBC Construction, survey the interior of the Adelphi Hotel in Saratoga Springs, which is about to be renovated and expanded

With $24 million in financing now in hand,
the owners of the Adelphi Hotel in downtown
Saratoga Springs have started the long-awaited
reconstruction of the 137-year-old hotel.

Jeff Ward, construction manager for RBC
Construction, an arm of property owner Richbell
Capital, said the ambitious project should
be completed in the summer of 2016.
“There is a lot of work to be done,” he said.
More work than was originally planned,
in fact.

In October, Richbell acquired additional
property on Washington Street from the
Bethesda Episcopal Church, around the corner
from the hotel at Adelphi’s 365 Broadway
location. The parcels, purchased for a total of
about $2 million, include the former church
rectory and adjacent parking lot, at 19-23
Washington St., and a three-story-building at
39-41 Washington St.

Ward said Richbell has agreed to lease the
latter parcel, a former parish house, to the
church until the spring of 2017. It has not
yet decided what it will do with the property
after that.

Plans are being formed for the property at
19-23 Washington St. Ward said the historic
stone mansion that had been used as a rectory
until 2012 will be refurbished and made
available for rent.

“It will be totally restored, as an historic
restoration,” Ward said. “It is tired, it needs
a lot of restoration, but it is in much better
shape than the hotel was.”

The parking lot property, which abuts
the rear of the hotel property, will become a
continuation of the Adelphi’s back courtyard.
“We’re looking at a large resort hotel pool,
a ballroom, and more hotel rooms,” Ward said,
noting that part of the project is still being
designed and is subject to approval by the city.
He said as many as 20 hotel rooms could
be added “but that will be the last phase of
the project.”

The plans for the Adelphi itself remain
as announced last summer. They include a
full historic renovation of the inside of the
four-story building, with little changes to the
outside of the structure, except for a cleaner
look and a new canopy to replicate the 1877
original.

The finished hotel–not counting the
Washington St. property–will be about 47,000
square feet, including an 8,200-square-foot addition.
It will have 32 two- and three-bedroom
luxury suites of 400 square feet and up.

The lobby will cover the entire first floor,
with shops, a bar, a fine-dining restaurant and
a 1,200 square-foot, glass-walled conservatory,
which will overlook the courtyard, gardens and eventually the pool.
The entire building–including the basement,
where a new spa will be located–will
be handicapped accessible, Ward said. In the
past, only the front lobby was accessible to
people in wheelchairs. Plans call for two new
elevators and two new staircases. The existing
grand staircase will be restored and fully
functional.

The Adelphi, which has been closed for
more than two years, had traditionally been a
summer-only hotel, but will be open all year
round when finished.

RBC Construction is general contractor for
the project, and Guilderland architect Dominick
Ranieri designed the new Adelphi. Ward
said Albany-based BCI Construction was hired
for the structural package. The contract for
steel work went to Stonebridge Iron and Steel
of Gansevoort. Masonry work will be done by AJS Masonry of Clifton Park, and Queensburybased
Galusha and Sons Construction is doing
site work.

“Those are the major contractors,” he said.
“There will be others.”

A unit of Richbell called Adelphi Hotel
Partners paid Sheila Packert $4.5 million for
the Adephi in 2012. The principals in Adelphi
Hotel Partners are Simon Mildé, chairman and
CEO of Richbell Capital; his son Toby Mildé,
president of Richbell, and Larry Roth. Richbell
has developed a number of residential communities
in the area, including The Paddocks
of Saratoga and The Kensington at Halfmoon.

The Adelphi closed following the summer
2012 season. The owners originally hoped to
reopen by the summer of 2014, but the project
proved more complicated than expected when
the building was determined to be structurally
unsound.