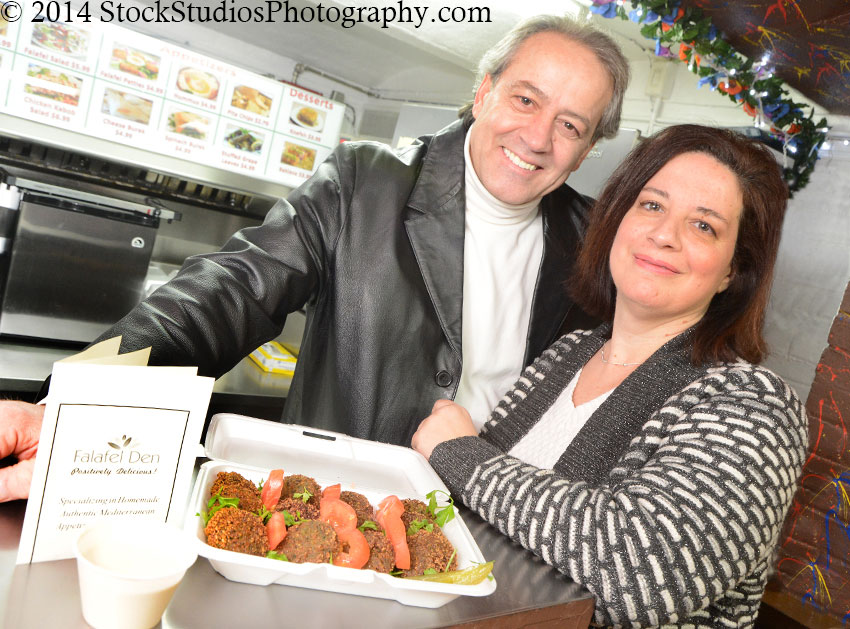 Zouhir Lian, left, and Sabreen Samman, opened the Falafel Den in Saratoga Springs, a small space out of which they prepare Mediterranean dishes for takeout

Falafel Den, a Mediterranean food takeout
business, has opened in a small space at 6 Phila
St. in Saratoga Springs.
The location was previously occupied by
Alpha Dogs, an establishment that specialized
in hotdogs and sausages on a take-out basis that
vacated the space last year.

Owner Sabreen Samman previously operated
Aladdin’s Restaurant in Amsterdam, another
Mediterranean eatery.
“Most of our customers were from the
Saratoga area, or the Albany area,” said Samman
about his restaurant. “They kept telling us ‘You
got to come to Saratoga’.”
Samman closed Aladdin’s and opened up
Falafel Den in December.

There is no eat-in dining area. All orders
are to-go, and the business also can also cater
events.

The main feature on the menu is the falafel,
a deep-fried chickpea patty. But there are other
items on the menu, including wraps, salads, and
desserts. The majority of the food is homemade, using fresh ingredients, she said.
“This is a unique cuisine we have,” said Samman.
“There are not a lot of similar restaurants.”
Samman said his favorite dish is the falafel
wrap, consisting of a pita stuffed with falafel
patties, fresh vegetables and a zesty tahini
yogurt sauce.

Customers can choose from other items such
as grilled chicken kabobs, hummus with pita
chips, or baklava for dessert.

All items on the menu are priced below $10.
Samman said she tries to keep prices affordable
for college students and diners on a budget.
Since moving to Saratoga Springs, Samman
said she has received a lot of positive feedback
from customers.

“We’re really surprised how welcoming everybody
has been. People keep saying, ‘We’re so
excited somebody has opened a falafel place’.”

As the restaurant settles into their new location,
they will have more regular hours.
Falafel Den opens every day at 11 am. For
more information, 886-9192 or www.falafelden.com.