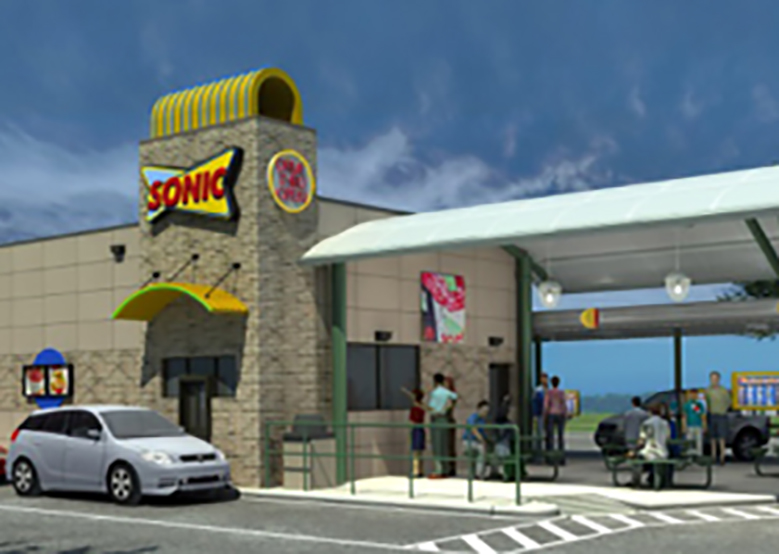 This rendering depicts the traditional style of the SONIC drive-in that the company builds from scratch. The company also allows renovation of existing spaces

SONIC, the drive-in restaurant chain based
in the central United States, plans to open seven
new franchise locations in the Capital District this
year, including Saratoga Springs and Clifton Park.

Company officials said the franchise operates
in 44 states and is expanding to the Northeastern
United States in order to meet growing demand.

SONIC recently opened restaurants in the
Rochester, Watertown, and Orange County areas,
with other locations soon coming to Buffalo and
Syracuse.

“At this time, we are unable to confirm exact
locations or opening dates for additional upstate
drive-ins, but hope to have good news to share
in the near future,” said Bob Franke, senior vice
president of franchise sales and international
development for SONIC.

He said Upstate New York “is definitely a priority
market for SONIC Drive-In. In under two years
we’ve announced four new franchise development
agreements to bring a total of 27 new drive-ins to
the top four markets in the region.

“Community reception has been incredible,
and recent drive-in openings in Watertown and
Rochester have been extremely successful. Beyond
this planned growth, we are still seeking
out qualified franchisees in Binghamton, Ithaca,
Utica, Rockland and Westchester counties, as well
as nearby states.

SONIC is best known for its drive-in experience. Guests can drive up to one of the dining
stalls, where one of the carhops on in-line skates
will take orders and bring it out to the car. Guests
can also order through the drive-through or order
inside the restaurant.

The first new location for the region, in Latham,
is expected to open in the spring.
“Through a combination of word-of-mouth
and increased national advertising, we’ve cultivated
strong demand for the SONIC experience
nationwide, and we see tremendous opportunity
to expand in the Northeast, in particular,” said
Franke. “Public response to our growth in upstate
New York has been phenomenal, with drive-ins
opening in Watertown and Rochester to lines
around the block.

“We look forward to working with the Fast Eats
team to continue to drive success in a market
that’s been clamoring for SONIC for years.”

The company said it will work with franchisees
to create flexibility within their location. Franchisees
may choose a traditional model, with 14 to 29
car stalls and a drive-through; renovating existing
buildings to create a unique drive-in space; or a
mall/airport model, a customizable indoor location.
Additional franchise opportunities are still
available.