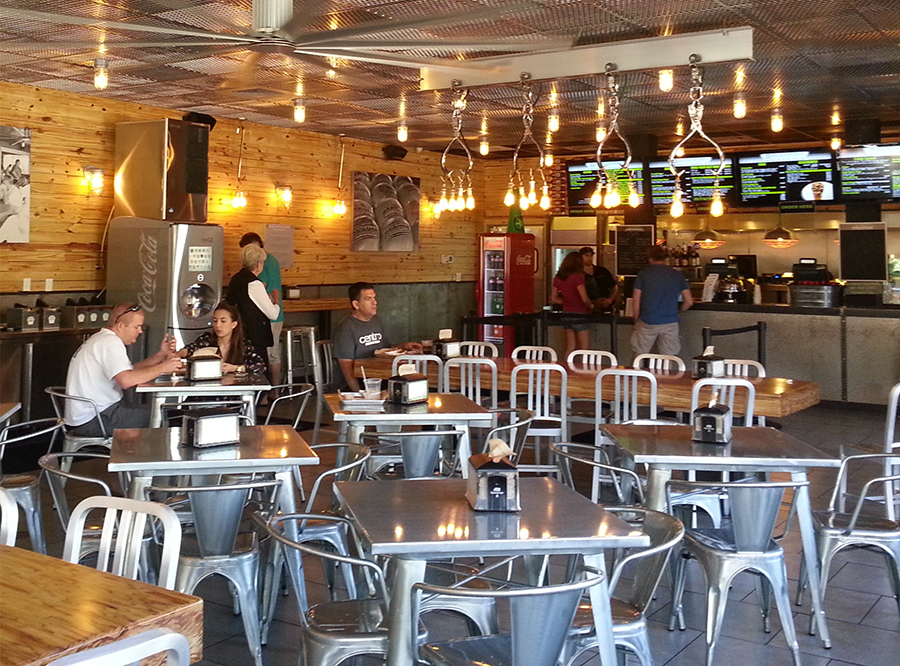 Two well-known area businessmen are
among a group that expects to own a new hamburger
restaurant on Broadway in Saratoga
Springs, shooting for an opening that will be
able to capitalize on the crowds coming into
the city for the season at Saratoga Race Course
this summer.

Bill Lia Jr. is part of the ownership of the
vast Lia Auto Group, which operates an array
of dealerships in the Capital District, including
Lia Nissan of Saratoga. He has no previous restaurant
experience. Nor do brothers Michael
and Vicent who are joining him in the venture.
But his third partner does.

Angelo Mazzone is owner of Mazzone Hospitality,
which owns and operates numerous
restaurants in the area, including Angelo’s
Prime Bar + Grill in Clifton Park, Prime at
Saratoga National, and the food and beverage
operations at the Gideon Putnam Resort and
Spa in Saratoga Springs and GlobalFoundries
in Malta.

The group is planning to open two restaurants,
part of the BurgerFi chain, this year.
One will be at 460 Broadway, the site that
Saratoga Saddlery & International Boutiques
is vacating.

It will have burgers made from Angus beef,
hand-cut french fires and onion rings, as well
as craft beers and wines, said Bill Lia.

The other will be in a new retail plaza at
860 New Loudon Road in Latham owned by
the Lias. Lia said the group is already getting
building permits and it could be open by June.
He said the germination of the idea came
from John Rosatti, who also owns a large array
of auto dealerships and is “an old family
friend.” Rosatti founded BurgerFi about four
years ago and also owns other eateries.

Lia said a “chance meeting” with Rosatti
early last year led to talk about BurgerFi and piqued Lia’s interest.
“The more I looked into it, the more I was
interested in it,” he noted. “Then I thought I’d
better talk to someone who thoroughly understands
the restaurant business.”

That person was his longtime friend Mazzone.
“Do me a favor and talk me out of this,” was
one of the things Lia said to Mazzone in the
early discussions. That didn’t occur and talks
got more serious.

Lia said in late February the partnership
was “pretty far along” in closing on the purchase
of the 460 Broadway space, which he
expected would be settled by late March or early April.
Lia said customers will order their meals
at a service counter, then be seated. Their
meals will be delivered to them in relatively
short order.

He said the company is also very eco-friendly.
Chairs will be made from recycled Coke
bottles and tables are made of compressed
recycled wood. There are also high-efficiency
heating, cooling and lighting systems.

“We’re very optimistic and excited about the
concept,” said Lia. We have high ambitions and
hopes … But we’re going to walk before we run.”
He said the group plans opening several
more BurgerFis in the Capital District and already
has target sites. Eventually, sites will be
set on expanding beyond the Capital District.

BurgerFi is based in North Palm Beach,
Florida, has 58 franchise and corporate-owned
locations. According to the restaurant website,
BurgerFi is short for “Burgerfication.” It claims
to serve burgers made from grass-fed Angus
beef, free of growth hormones and additives.
Also on the menu are Kobe beef hot dogs and
fresh-cut fries with toppings such as chili and
hot Cajun spices.