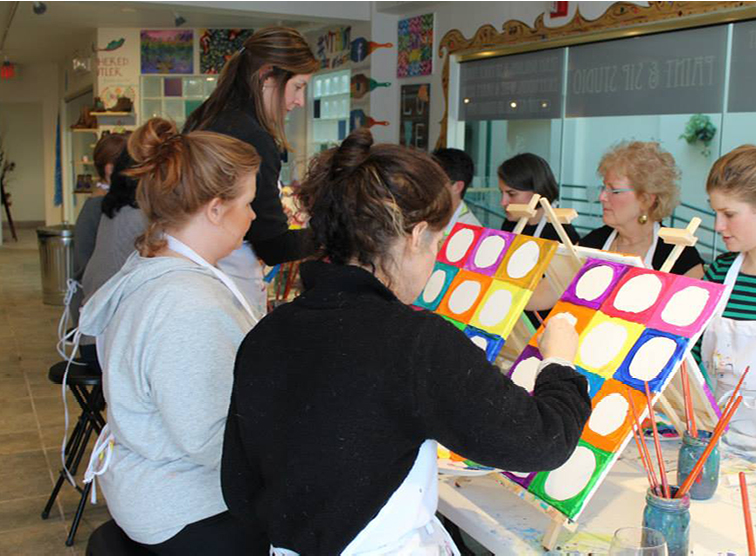 Customers busy themselves creating works of art at the Burlington Paint and Sip Studio, opened by Catherine Hover, who owns similar shops in Saratoga and Latham

Saratoga Paint and Sip Studio has expanded
to a brand new studio in Burlington, Vt., the third
location for owner Catherine Hover.

The new location, Burlington Paint and Sip
Studio, features the same creative yet inspirational
experience as the Saratoga and Latham studios,
she said.

After opening Saratoga Paint and Sip Studio
in Saratoga Springs in 2012 and expanding to a
second location in Latham in 2013, Hover saw
an opportunity to bring the business to Vermont
after meeting people who had made her New York
studios a travel destination.

“So many people have visited to our Saratoga
and Latham studios from Vermont for the Paint and
Sip experience, and it really is one of a kind,” said
Hover. “Our painting events are fun and relaxing at the same time, and require no artistic ability. You
just have to show up and we help you with the rest.”

At Burlington Paint and Sip Studio, and also
at her local Saratoga Paint and Sip locations, an
artist instructs guests through an original work of
art. Participants have the option of drinking a glass
of wine, beer, or soda.

Burlington Paint And Sip Studio is located at 29
Church St. in Burlington, with an entrance on Cherry
Street. Its phone number is 802-540-2090 and its
website is www.burlingtonpaintandsip.com.