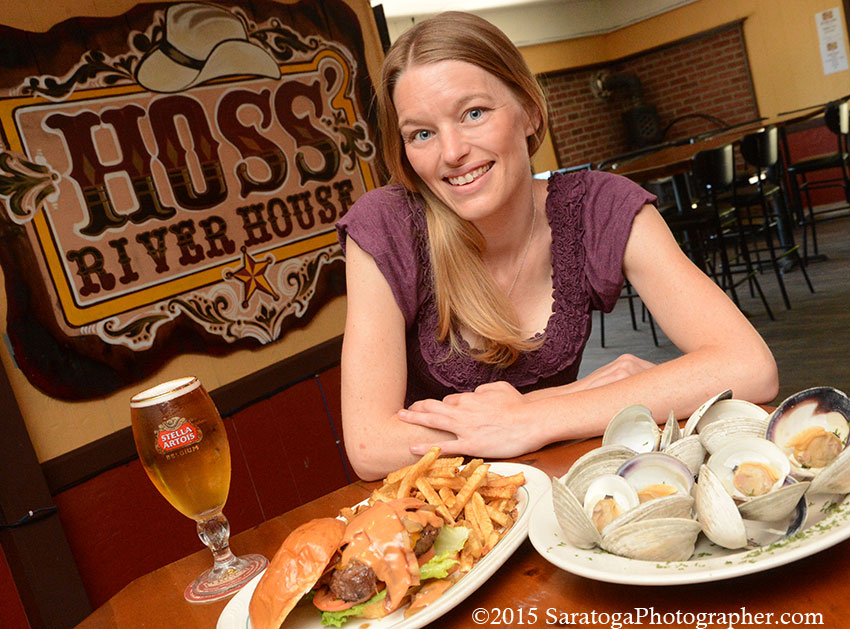 Amy Gauthier of Hoss’ River House sits with a plate of one of the many food offerings the new establishment in Halfmoon has for customers. The facility also has weekly country dancing

Hoss’ River House is a new restaurant
in Halfmoon where owner Claude Gauthier
has brought country flavor in both food and
atmosphere.

It was opened earlier this year at 32 ClamsteamRoad
by Gauthier. It was previously the
Klamsteam Tavern and Gauthier was a patron
there. He was offered the opportunity to buy
the restaurant and took on the challenge.

Gauthier, known to many as Big Hoss, has
experience in several industries including
real estate and working as a general contractor.
He previously owned Buckboard Inc., a
country dance hall in Malta, so he brings his
well-rounded experience to Hoss’ River House.

At the restaurant Gauthier promises to
provide the same high level of quality that
the previous owners did. “Nothing is frozen.
Everything is homemade,” he said.

Eric Freitag is the chef. Some of the more
popular items include large chicken pot pies,
ribeye steak, meatloaf, and the half-pound
Hoss burger. Even the appetizers are made
fresh. Freitag hand-seasons and prepares the
chicken wings, and rolls the mozzarella sticks
in a proprietary blend of bread crumbs and
spices. Customers can still come in for the
fresh steamed clams that were a favorite dish
at the Klamsteam Tavern.

As for Gauthier’s favorite dish, he has
trouble deciding.
“The pot pie, the meatloaf, and the steak,”
he said. “It’s a tie with those three. It’s all really
good.”

But what draws many people into Hoss’ River
House isn’t the food – it’s the dancing, he said.
Gauthier learned country dancing at Just
Country in Malta. When that establishment
closed, he saw the need for a new country
dancing venue in the region.

Hoss’ River House provides country dancing
lessons on Monday and Thursday nights. There
are beginner lessons and intermediate lessons.
Gauthier encourages anybody who wants to
learn country dancing to come and give it a try.
Gauthier said the lessons are very popular,
with 50 to 60 people coming on a Monday night
for beginner dance lessons.

The restaurant also hosts a dance night
every Saturday. People can come in, listen to
country music, dance and have some fun. There
is no cover charge for the dance.

“Country music is really popular right now”
said Gauthier. “So to have a whole full-service
bar and restaurant devoted to this, I have
no competition,” he said, explaining why he
believes his restaurant has been successful.

Hoss’ River House also has a marina outside
of the facility. It will open in June and stay
open during the summer months. The marina
can accommodate up to 16 boats and will have
a courtesy docking policy. Boaters can safely
dock their boats overnight or short term, and
come up to the restaurant or spend a bit of time
in town. Gauthier said he is eager to grab some
of the traffic flowing through the Mohawk River.
Hoss’ River House is a veteran-owned business.

Gauthier served in the U.S. Army during
the Vietnam War. Each night before dancing,
the National Anthem is played. The restaurant
offers military discounts.

There are several events happening this
summer at Hoss’ River House. Wednesday
nights will be Biker Night. Also, on Sunday,
June 14, there will be a cowboy barbecue. It
will feature a delicious pulled pork platter,
plus live entertainment. Tickets are $20 each.

For those planning a special occasion, the
restaurant is able to host banquets, wedding
parties, and other events.

Hoss’ River House is open from noon until
midnight every day. The phone number is
280-1747.