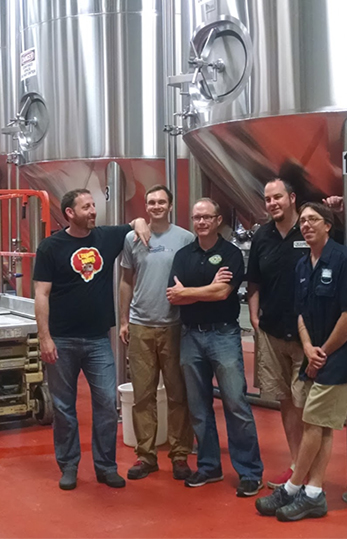 Shmaltz Brewing Co. in Clifton Park announced
in May the brewing of a Statewide Pale
Ale, which will be used to raise funds for the
New York State Brewers Association (NYSBA),
an organization that represents and educates its
members and customers throughout the state.
The association was founded in 2003.

Company officials said 170 kegs were produced
for the fundraiser. The goal is to raise
more than $10,000 for the association through
the beer sales.

On May 27, the Clifton Park brewery was the
site of the first New York Statewide Collaboration
Brew Day. Brewers from around the state
made the first major batch of Statewide Pale Ale.
Schmaltz also hosted a Meet The Brewers Happy
Hour for sampling.

Statewide Pale Ale was created by Richie
Saunders, lead brewer of Shmaltz Brewing Co.,
with the help of other collaborating brewers.
Officials said New York State ingredients were
used, including malts and hops.

The goal of the project is to amass funds to
continue the expansion of interest and awareness
and excitement for New York state beer. All
of the funds that are raised go to the association
to help protect and promote craft beer in New
York state, according to Paul Leone, executive
director of the NYSBA.

According to the association, the growth of
the craft beer segment continues to be strong
and New York state’s share of that growth has
exceeded that of breweries on the national level.

The association cites these statistics:

“The outlook for breweries in New York State
remains strong with more breweries-in-planning
than ever, continued barrelage increases and
growth in distribution in and out of state,” the
group said in a statement on its website. “In addition,
with tremendous support from Gov. Andrew
Cuomo and legislators throughout the state,
breweries in New York are enjoying great success
and are poised to continue making great beer,
increase market share, and create more jobs.”