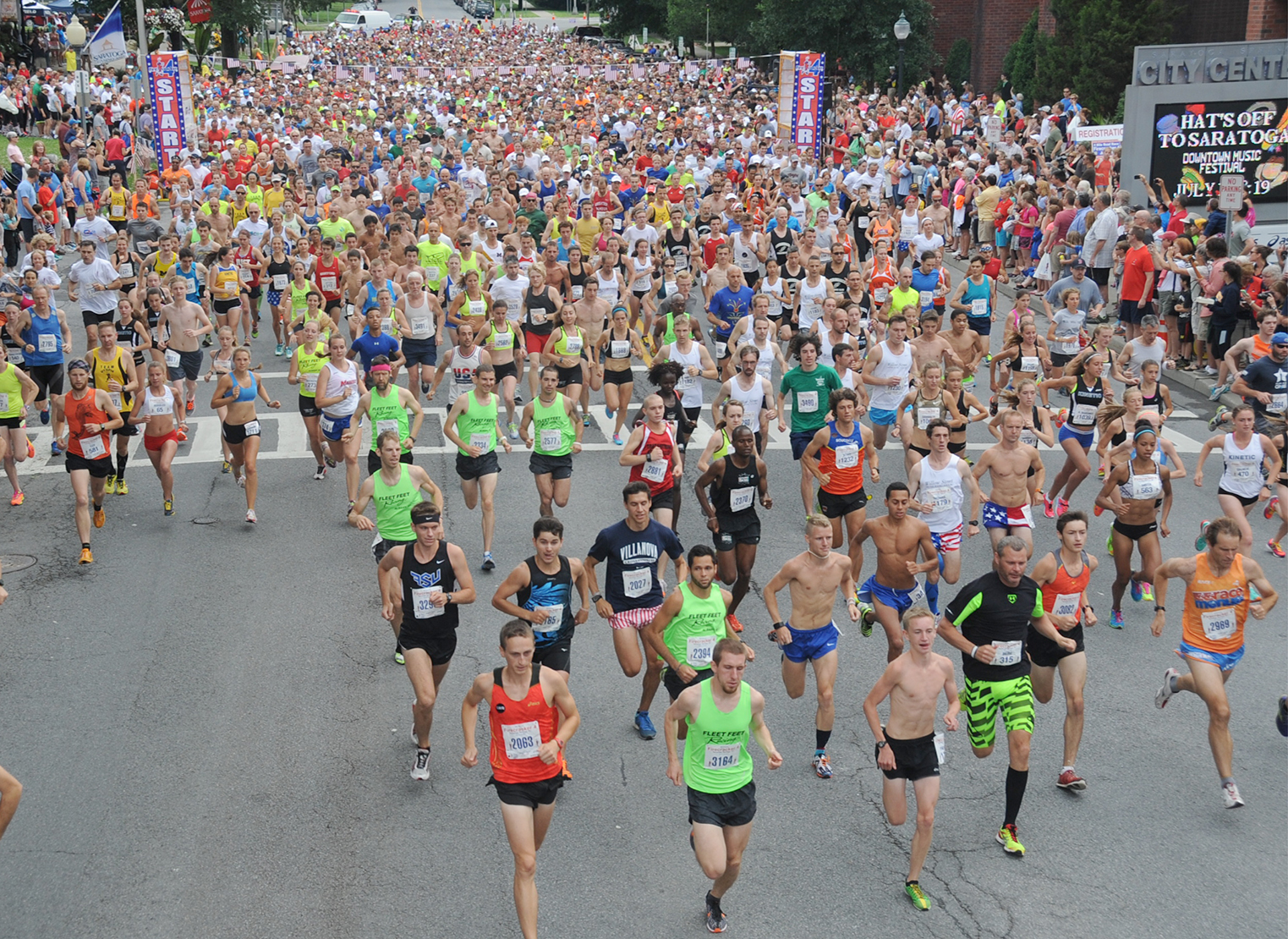 Runners take off at the start of last year’s Firecracker4 road race that began on Broadway in Saratoga Springs. Registration is open for this year’s event, though same-day sign-up is available

“The growth of this race and the numerous
businesses and individuals who support
it through their running, appearances
in our vendor village, and sponsorships
demonstrate the importance of healthy
lifestyles and running solidarity here in
Saratoga Springs,” said race co-director
Bob Vanderminden.

Fleet Feet Sports, locally-owned running
shops in Malta and Albany, returned
this year as the race’s presenting sponsor,
“because they share our passion for wellness
and building stronger communities
through running,” said race co-director
Peter Goutos.

Vanderminden said registrations are
solidly ahead of last year at this time, a
tribute to the growing regional popularity
of the event.

The race starts at 9 a.m. at the Saratoga
Springs City Center, traverses Broadway
through the downtown shopping district,
and then winds through the historic
streets of Saratoga’s East Side neighborhood,
where more than 20 bands play on
street corners and local residents cheer
and set up garden-hose misting stations
to benefit the runners.

A grand parade downtown is held directly
after the race. In Congress Park after
the race there is a barbecue and dessert
festival, classic car show, live music, city
tours, face painting and fireworks at dusk.

It is followed by the All-American Celebration
throughout downtown Saratoga
Springs, with holiday activities for families.

FC4 Inc., the nonprofit organization
that manages the race, will donate proceeds
from the event to five local community
organizations this year:

“It’s very important to us to help move
the wellness and fitness movement ahead
in our region,” said Goutos. “We give the
proceeds of this race to organizations
that are forward-thinking and supportive
of athletes of all ages, abilities, and
backgrounds. We also want to help build
infrastructure here that will be used for
many generations to come.”

The 2015 event includes these new
features:

â€¢ Expanded runners’ villages for high
schools, USATF teams, and military/veterans
teams to set up pop-up tents where
they can gather before and after the race

â€¢ Food-raiser for the Regional Food
Bank of Northeastern New York, whereby
runners and spectators are invited to donate
shelf-stable food at Fleet Feet Sports
stores and at the race registration/packet
pick-up area

There is $6,000 in monetary prizes to
the top individual and team finishers
and 174 award categories and prizes for
runners of all ages. There will be special
recognition of military and public safety
(police/fire/EMS) competitors including
team competitions.

“Fourteen teams have already registered
for the 2015 Run Your Colors event.
It’s simple to win: gather your friends,
family, neighbors, or co-workers and be the
group with the most registered runners,”
Goutos explained.

“Over the past nine years, this race has
helped to define a Saratoga July Fourth
tradition. We are excited this year to make
the race more inclusive and inviting to local
military veterans,” said Vanderminden.