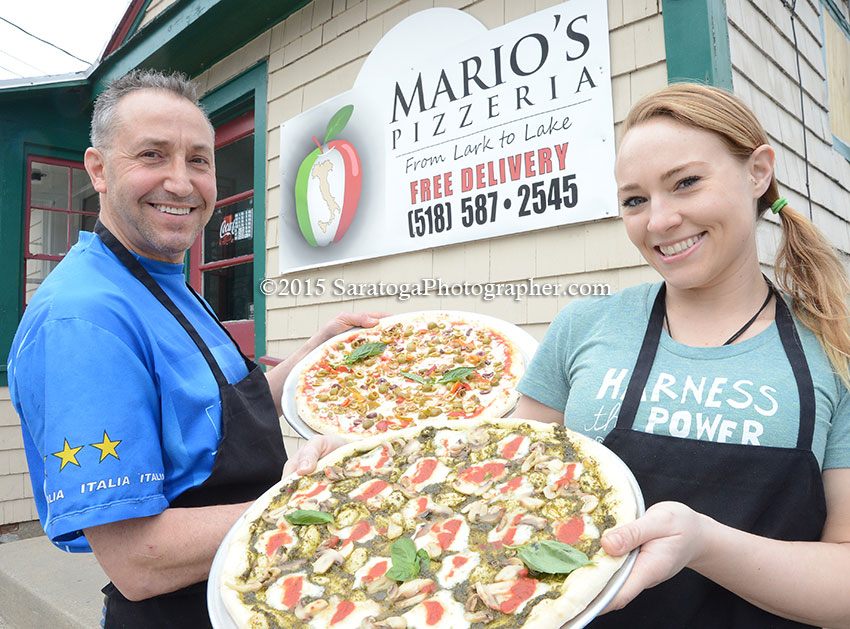 Gerardo Mele, owner of Mario’s Pizzeria, From Lark to Lake, at 223 Lake Ave. in Saratoga Springs, and Jordan Rea Groncki show off some pizza’s in front of the establishment.

Gerardo Mele knows real Italian food. A
native of Italy, he has been around authentic
Italian food his entire life.

Now owner of Mario’s Pizzeria, From Lark
to Lake, at 223 Lake Ave. in Saratoga Springs,
Mele said he is happy to be doing what he
loves in a place that he says has wonderful
people who appreciate good food.

“My business has basically been running
by word of mouth. I am so happy to be doing
what I love and in such a great community,”
said Mele.

Mele owned Mario’s Pizza on Lark Street
in Albany for years before closing in 1997. He
said it was difficult decision to give it up, but
needed a more family friendly job in order to
raise his children as a single dad. It was then
that he decided to start his own remodeling
and renovation business, allowing him to be
home at night and weekends.

Today, Mele’s children,who are now adults,
help him with the pizza business when they
can. He also still works remodeling jobs, in cluding the work to get Mario’ s going.
Mele said the business has been steady,
so much so that he hasn’t had a chance to
deliver the 5,000 flyers that he had made.
“Right now, I am in the kitchen seven days
a week,” said Mele.

Growing up next to Sicily, in the state of
Calabria, Mele said cooking was always a family
affair. He said Mario’s menu is filled with
recipes that have been in his family for years.
Many of the items are dishes that many have
never heard of, according to Mele.

Everything at Mario’s is made in the back
kitchen, including all sauces, pestos, eggplant
and chicken dishes, and ragus. The
menu is what what Mele calls selective. He
said it is based on dishes that his family has
perfected through the years. Mario’s served
as a popular spot on Lark Street and Mele is
hopeful Saratoga will serve him just as well.