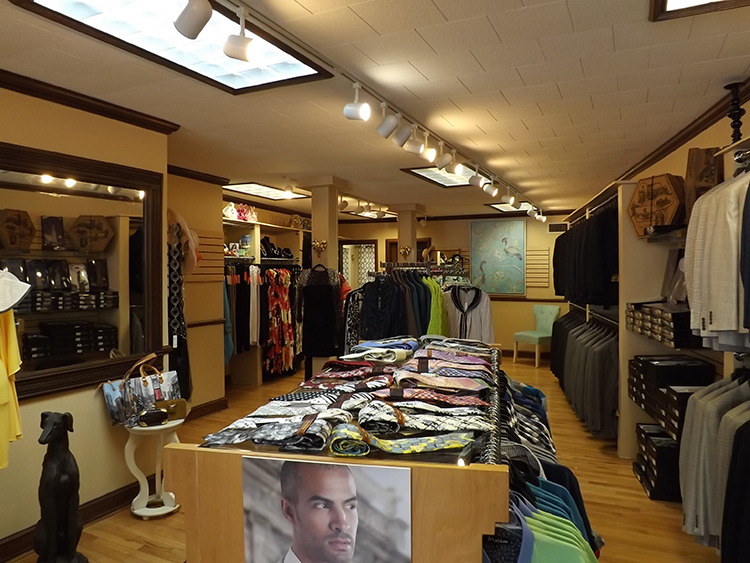 For the past decade, fashion experts Vince
Montesano and Jennie Kelemen have been
dressing those in and around Saratoga, as
well as those who visit the Spa City during
the summers months.

They once operated a store at 506 Broadway
in Saratoga Springs, after a two-year hiatus
the two are back to work in a new location.

Patrons can visit 379 Broadway Clothier, the
address is the same as the name, for men’s
and ladies’ dresswear, shoes, jewelry, tuxedos,
leather jackets, purses and other specialty
fashion retail items.

Kelemen said they left their prior location
reluctantly. The cost of the previous Broadway
location was no longer allowing them to give
their customers the best possible price.

She said the new location, next to Druther’s,
is not only highly visible, but also cost
effective. The space was formerly the home to
Swedish Hill Winery, which recently moved.
“Where we are now allows us to give our
customers the best value, and we are next
to Druther’s, and everyone knows Druther’s,”
said Kelemen.

She said no shop in Saratoga would be
complete without Saratoga Race Course-style
hats. Once the track season ends and cooler
temperatures stream in, patrons will be able
to find a selection of furs.

“We have all our regular patrons who have
missed us and are happy to see us back, but
we of course have all of the summer visitors,
looking for a piece of Saratoga fashion,” said
Kelemen.

Montesano and Kelemen owned La Sartoria,
which operated for 10 years at 506
Broadway in the Algonquin Building. Kelemen
also owns the Brewing Boutique at the
Saratoga Hilton, which she’s operated for the
past six years.

A native of Italy, Montesano also makes
custom clothing and does tailor work. Kelemen
said the store reflects Montesano’s roots
with mostly Italian designers and fashion
lines, adding that they are transitioning to
Italian labels only.