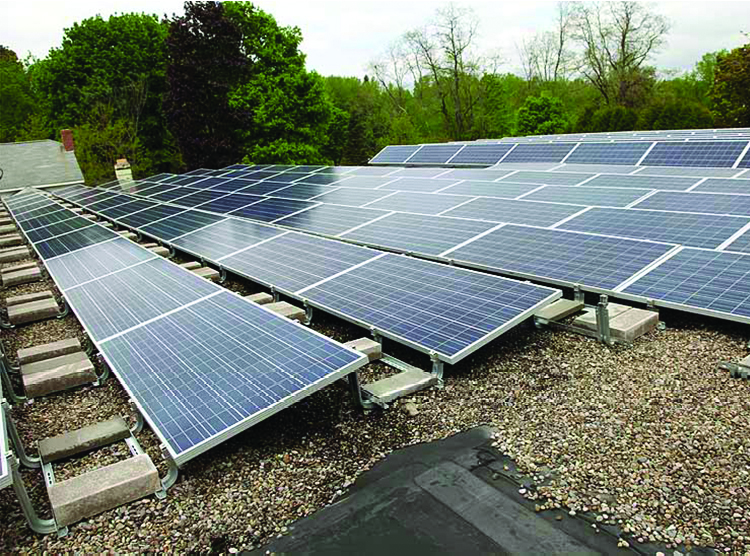 These solar panels are atop Galway Market in Galway, one of the projects by Active Solar Development. Owner Frank McCleneghen says the commercial side of business has grown

Tax incentives for converting to solar energy
are coming to an end, but the demand
for clean energy continues to grow.
Frank McCleneghen of Active Solar Development
in Galway, has seen commercial
demand grow.

“We’ve shifted away from doing only solar
electric [projects] as the incentives have
decreased. We have seen the larger commercial
business industry become much
more competitive and the margins tighter
than they were before,” said McCleneghen.

In July, New York state announced that
the growth of solar power has increased more
than 300 percent from 2011 to 2014, twice
the rate of U.S. solar growth overall. The
increase was attributed to state initiatives
to build a clean, resilient and affordable
energy systems.

“Solar is at a point today where it is both
affordable to own and lease,” said Ben Sopczyk,
marketing director and project manager
for Apex Solar Power in Queensbury. “It
offsets the known cost of electricity associated
with home or business ownership that
has increased in price on average over the
last 30 years. You save money every month
with your system, and you increase the equity
value of your home or business.”

He said the demand for solar power has grown steadily, especially in recent years.
“In the United States right now, a new
solar project is being installed every 20
minutes,” said Sopczyk. “The growth has
been huge.”

He said two years ago, his staff was
about 10 total employees in one office.
“Today, we have over 80 employees in three
offices: Queensbury, Syracuse, and New
Windsor. While we have been in business
for much longer than that, the growth has
been exponential in the past few years due
to the current incentive levels and the drop
in solar equipment prices.”

McCleneghan said Active Solar has found
success in strategic relationships.
“We have had really good success working
with property developers, installing solar
hot water in commercial buildings. We’re
working with Omni Development to install
thermal hot water in a 12-story commercial
building in Albany. We are doing their domestic
hot water for a hundred units. The solar
is picking up 50 percent of the load on that
and cutting down on their fuel costs while
capturing the tax incentives,” he said.

Sopczyk said the conversion to solar energy
was “extremely simple”.
“The only requirement is a place to put
the solar system that receives sunlight 80 percent of the year,” he noted. “We take care
of all permit, incentive and utility applications.
We can provide financing as well. As
far as the actual ‘conversion’ goes, nothing
changes in the {provision of service to the}
home or business,” he said.

He said solar energy can be used yearround,
despite long upstate winters.
“Solar produces electricity over the entire
year. When the system is installed, the utility
company provides a new ‘net’ meter that
tracks the electricity produced by the system,
and what is used on the property. Extra
energy credits are built up in the summer
to be used in the winter, so at the end of
12 months, your system has produced all
the electricity that you have used, and your
annual net usage becomes 0 kilowatt hours.
This offsets everything on the bill that is calculated
based on the usage. This means both the supply and delivery are offset,” he said.

Tax incentives from previous years for
converting to solar energy are decreasing
and will soon end altogether. But Sopczyk
said the investment is worth the upfront
cost.

“The average home recoups its costs in
4-8 years, and a business can recoup in 4-6.
And aside from the usage savings and easier
planned monthly costs, businesses gain a 30
percent tax credit based on the system cost,
and can depreciate the cost of the system to
additional tax savings,” said Sopczyk. “With
these two incentives and the help of NYSERDA
incentives, up to 65 percent of the
system cost can be recouped with these tax
and depreciation credits,”

“The benefits are tangible, the incentives
are helping and they will not be here for
much longer,” stated Sopczyk.