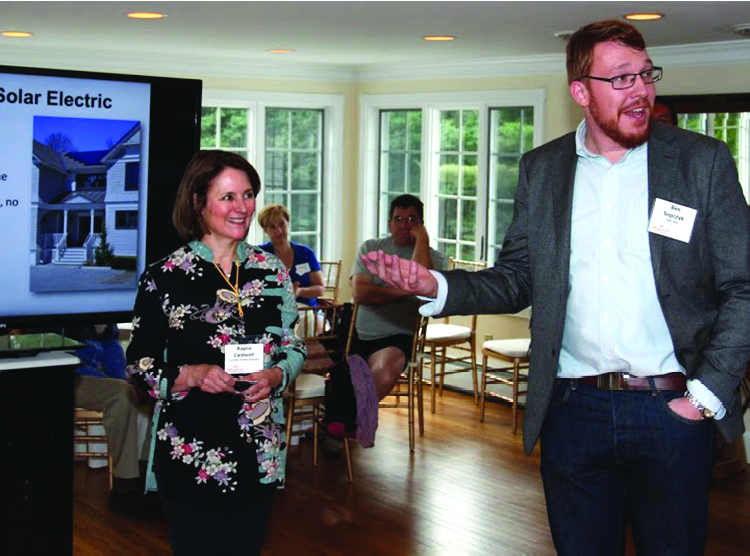 The city of Saratoga Springs announced
that two companies have been selected to
provide solar PV installations through the
Solarize Saratoga campaign.
The installers were introduced at the
Official launch party of Solarize Saratoga
on July 8.

“This event represents a great step that
the city is taking to bring the benefits of
clean energy to its citizens,” said Mayor
Joanne Yepsen. “The community is coming
together to make it easier and more
affordable for Saratoga area homeowners
and businesses to install solar PV systems.”

City officials said they are offering
discounted group pricing for those who
purchase solar before mid-October through
the Solarize Saratoga program. This community-
based strategy also streamlines the
process to make purchasing solar easier
than ever.

“The Solarize model has been very successful
nationwide in lowering the barriers
to the adoption of solar power,” said
campaign co-chairwoman Rayna Caldwell.

“By pre-qualifying installers and negotiating
lower group prices, we boost the confidence
that home and business owners have both
in quality and price.”

Tina Carton, the other co-chairwoman, said , “Many people don’t realize that even
in Upstate New York, we have plenty of
sun to make solar a viable and economical
energy choice.”

Funds to support the campaign are
provided by the NYSERDA as part of the
statewide NY-SUN Initiative. Community
partners Sustainable Saratoga and Green
Conscience Home & Garden have signed
on to promote awareness of the campaign.

Several community workshops will be
held over the next few months to further
explain the process and help people enroll
in the Solarize Saratoga program.

Homeowners and businesses who sign up
for solar installations by Oct. 7 will be able
to take advantage of group rates below market
prices. The more customers who sign up,
the lower the price will be, city officials said.
For more information, visit www.solarizesaratoga.org.

Officials said Solarize campaigns nationwide
have rolled out to hundreds of
communities, led by government agencies
and community organizations, reaching
thousands of households and installing over
8 megawatts of solar power. Communities
that participate in Solarize campaigns stay
educated and involved after the campaigns
wrap up.

Solarize Saratoga is a nine-month program
spearheaded by the city with support
from community partners Green Conscience
Home and Garden and Sustainable
Saratoga. The enrollment period began in
July, with the last installations wrapping
up in December.