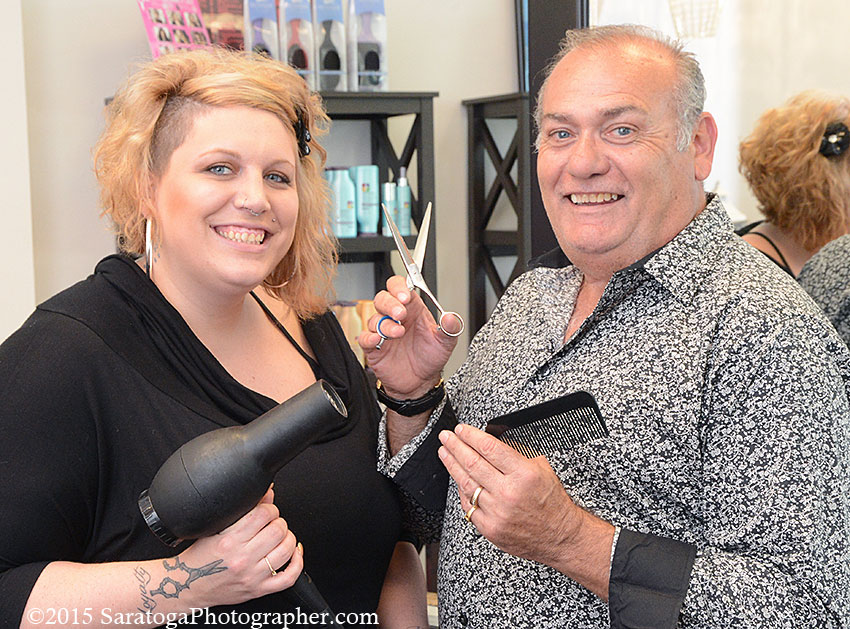 Danielle Cron and Mike Meluziis are among the stylists at Royal Salon, a shop that opened recently at the Embassy Suites hotel in Congress Plaza, Saratoga Springs

Co-owners Lisa Wilson and Deborah Meluziis
are no newcomers to the hair styling industry.
The two have owned and operated salons in
the Capital Region for the past 10 years, including
Guys & Gals Hair Salon in Queensbury and
Hair Mechanix, a barber shop in Wilton.

Following the success of the first two locations,
the co-owners looked for a third venue to
expand their business.

In July, they opened the Royal Salon in the
new Embassy Suites hotel in Congress Plaza,
Saratoga Springs. The salon is leased from the
hotel, but not employed by it. It is open to the
public, not just residents of the hotel.

“We decided with this third location to
combine the hair salon and barber shop” said
Wilson.

The Royal Salon offers services for both
men and women. The salon features services
such as women’s cuts, color services, wash and
blow dry, and more. The barber shop provides
services such as hot towel shave, men’s cuts,
color camo, and more.

The facility has crisp white walls and black
furniture, and large windows overlooking
Saratoga Springs. Guests can come in and relax,
knowing the experienced stylists will take care
of their needs.

The salon has four service providers currently.
There is spacious parking at the hotel and
it is a convenient walk to downtown Saratoga.
“I’ve always loved to do hair” said Wilson.
“It’s a gift for me, being able to make somebody
feel beautiful.”

The co-owners said the salon is doing well
this first summer season.
They hope to draw locals into the salon. Royal
Salon plans to hold its grand opening after
Labor Day weekend.
Walk-ins are welcome, as well as appointments.